OG Anunoby expected to return for Toronto during NBA Finals 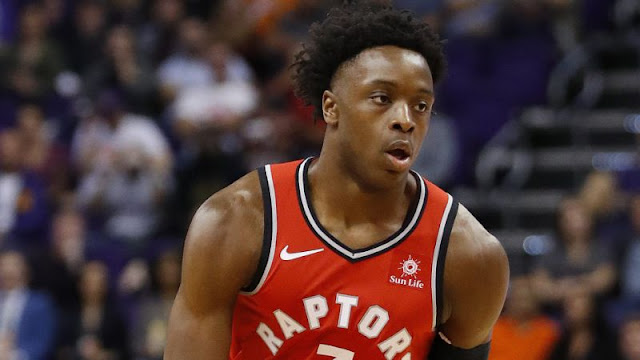 More good news await the Toronto Raptors as they are bound to get a boost from a returning OG Anunoby as they head to the 2019 NBA Finals.
The team is going to need every defense they can get from its roster as they try to dethrone the Golden State Warriors.
Anunoby underwent an emergency appendectomy which caused him to be out since early April. He has missed all of the Raptors' playoff games this season as well.

A new report has emerged saying the Raptors forward could possibly return before the end of this final series.

The second-year forward is one in many two-way players in the Raptors' rotation. Anunoby plays hard on both ends of the floor.

They played an excellent job defending the Milwaukee Bucks by limiting the touches of other scoring options. A clash with the Warriors is a different story however.

Kyle Lowry and Steph Curry are deinitely going to enjoy a shootout.


The impact of OG

Bench depth is an issue for the Warriors while the Raptors have proved that it can also rely on its bench when its main cast rests. Now on to Anunoby..

Havng him available would help Toronto be more switchable and more adept especially when the Warriors try to play small ball.

Anunoby's hard play on defense is a reliever for defenders who will deninitely take turns trying to stop whoever has the hot hand.

The exact timetable for Anunoby’s potential return is yet to be determined. Game 1 might not be possible as it is relatively near but Game 2 is next Sunday which gives him ample time to get healthy and ready.

This also is good news for Leonard as his high usage rate caused him to sit out several games this year simply to rest.

With the amount of work Leonard had to put since the first round, it is obvoious how Anunoby could have eased that load a little bit.

Toronto needs Anunoby back as soon as possible especially as they have to make their homecourt advantage count.


Will OG Anunoby be back in time for the Toronto Raptors? How will this affect the team's rotation? Let us know what you think.