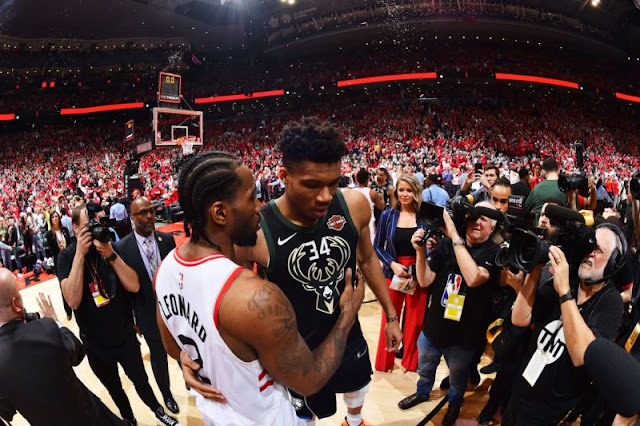 The team up north was the better team that night.

The Toronto Raptors trailed by as many as 15 points in the second half before sparking a late surge to complete the four-game comeback. and seal their

It was again Kawhi Leonard's show as he put on another all-around performance to lift his team up to a 100-94 game 6 victory over the Milwaukee Bucks.

Not only did they eliminate the team with the league's best record, but it also to books them their first trip to the NBA Finals.

“Just one possession at a time,” Leonard said in his postgame interview. “We kept fighting all game. We were down 10 points. We thought calls weren’t going our way, but we just kept striving and striving.”

Comeback is real for the Raptors

The Bucks were leading 50-43 at the half. They even managed to bring the lead up 76-61 before the fourth quarter.

The Raptors fired back with  a 17-2 run to eventually tie the game early in the fourth quarter. They took over from there as the they continued to make shots and control the ball against the Bucks.

“We were able to make it really difficult for them,” Norman Powell said. “We were really tight on that defensive end which gave our offense life because we were able to get on the transition.”

Milwaukee managed to trim the lead to two points late, but Leonard stabbed them witha. dagger 3-point shot by Leonard with 3 minutes to play.

A couple of key rebounds down the stretch sealed the deal for Toronto.

Leonard was consistent all series long as he finished the night with 27 points, 17 rebounds and 7 assists.

Kyle Lowry was having a good series as well as he added 17 points, 5 rebounds and 8 assists.

Kawhi returns to the NBA Finals

Leonard is returning to the NBA Finals as a different player this time. He is now the man in charge instead of being a rotational piece with the San Antonio Spurs.

The finals is going to be a chess match between offense and defens as the Raptors take on the Golden State Warriors.

It will be Toronto’s first trip to a championship, while the Warriors are making their fifth-straight appearance.

Leonard was a key piece of the Spurs' rotation suring their back-to-back trips to the finals in 2013 and 2014. The Spurs won in 2014 where Leonard was named Finals MVP

“I worked so hard to get to this point with the season I had last year,” Leonard said, reflecting on his return. “All that hard work put together and now we’re here. It’s exciting.

Toronto and Golden State will play Game 1 of the Finals on Thursday at 9 p.m. ET in Toronto.

Can the Toronto Raptors win all the way? Tell us which side are you choosing.