REPORT: Kawhi Leonard Headed to the Raptors in a deal involving Demar DeRozan 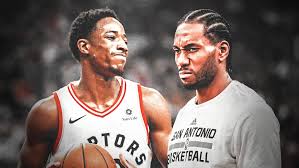 Two teams shaken to the core

The San Antonio Spurs have finally found a landing spot for Kawhi Leonard in the Eastern Conference. The Spurs and the Toronto Raptors reached a deal involving All Star Demar DeRozan.
The Spurs are going to receive DeRozan, Jakob Poeltl, and a protected 2019 1st-Round Draft Pick in exchange for Leonard and Danny Green, according to sources.

Not a fan of the trade

The two All Stars are not a fan of the trade according to league sources. Leonard, who is bound to be a free agent in 2019 has no desire to play for Toronto, while DeRozan has also expressed his displeasure toward a possible move when he was informed of the possibility.

A number of teams such as the Boston Celtics, Los Angeles Clippers, Los Angeles Lakers, and the Philadelphia 76ers were all interested in the services of Leonard. It was the Toronto Raptors however that presented the best potential current and future package according to NBA executives.

What each team gets out of the trade

DeRozan is a nine-year NBA veteran. He was drafted as the No. 9 pick in the 2009 NBA Draft by the Toronto Raptors.

He has been with the Raptors ever since and became the face of the franchise, which lacked one since the Vince Carter era.

The Raptors relied on him heavily to carry the team to the promised land as the five-year, $139 million contract extension he signed in 2016 states. He is a four-time NBA All-Star and has been a vital part of the organization's success.

The Spurs will now be getting an explosive scorer, who is capable of scoring in bunches. It just remains to be seen how that will fare against a ball-rotation organization like the Spurs.

Leonard on the other hand is a seven-year NBA veteran. He was drafted as the 15th pick in the 2011 NBA Draft by the Indiana Pacers, but his draft rights were traded to the Spurs in exchange for George Hill.

He is a former Finals MVP after leading the Spurs to the 2014 championship and a two-time NBA All Star. He has been a key player for the organization being an efficient scorer and a solid defender.

The Raptors will now be getting a player whose main focus is on the game and winning. There are reports however that Leonard is not interested in playing for Toronto which might not bode well for a city with a culture that cares a lot about the franchise.

We all have to stay tuned for what this will mean for the franchise up north.

It will be remembered that...

Leonard and the Spurs’ franchise had a huge falling out last season after issues of overall mistrust stemming from the handling of his quadriceps injury. This prompted Leonard's desire to be traded.

A meeting was made in between Leonard and Spurs coach Gregg Popovich but no resolution was made as Leonard's stance still had not changed.

Leonard will be a free agent in 2019 and expressed his desire to be in Los Angeles.


Will Kawhi Leonard suit up for the Raptors? Or will it be history repeat itself at the other side of the conference? Let us know your thoughts.