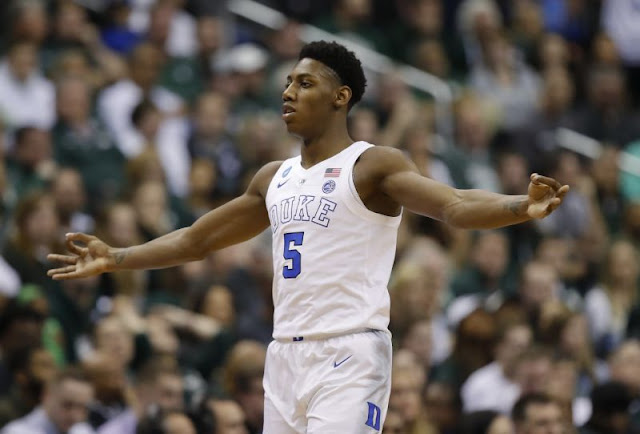 Duke University's stars have been quiet since their elimination from the NCAA tournament. One of it's star freshmen has broken his silence on the future.. His name is RJ Barrett.
He became the first member of Duke’s star freshman class to announce his NBA intentions. He revealed his intent to declare for the 2019 NBA draft on Wednesday.
The Blue Devils have four freshmen on their lineup who expected to be one-and-dones after completing a full year under the program.

Now that Barrett has made his plans official, we are still waiting on Zion Williamson, and Cam Reddish to make announcements soon.

Freshman point guard Tre Jones announced that he will be returning for his sophomore season.

Barrett is one of the top prospects on mock draft boards. He is projected to go as early as top-five in this year's NBA draft. Reddish is also projected as a potential lottery pick if he decides to turn pro.

The 6-7 Barrett averaged over 22.6 points, 7.6 rebounds, and 4.3 assists per game in his lone season for Duke. He and Williamson both led the team in scoring.

Barrett scored 21 points in Duke’s Elite Eight loss to Michigan State. He made some mishaps in that game with some missed crucial shots and errors. The Spartans won 68-67.

He was the one who carried Duke however when Williamson suffered a knee injury causing him to miss five games.

Williams injured his knee in February against North Carolina. Duke lost that game but Barrett was the focal point of the team’s offense scoring 33 points.

Barrett tallied at least 26 or more points in three of the five games that Williamson missed.

Williamson has remained silent at the moment but is expected to declare for draft as well.

Barrett's future in the NBA

Williamson is poised to become No. 1 overall pick shall he declare for June's draft. The No. 2 spot is still a debate between Barrett and Murray State’s Ja Morant.

The New York Knicks, Phoenix Suns, and the Cleveland Cavaliers have the biggest chance to land a pick that can be used for an on-demand prospect like Barrett.

The Knicks look convinced that they will win the draft lottery and use the top overall pick to select Williamson. Shall bad luck hit them, chances are they can still land Barrett to their team.

The decent play and potential of 19-year old wing Kevin Knox and the strong possibility of Kevin Durant signing with them in free agency is intriguing.

Either they create an offense centered around Durant, Knox, and Barrett or the latter gets buried deep as far as go-to options. Morant seems to fill in a need for the Knicks more than Barrett does.

As for the Suns, the team already has a poor man's Kobe-Shaq duo in Devin Booker and DeAndre Ayton. Barrett might not get as much touches as he expects as a top option in Duke.

Cleveland or Memphis are a good fit for Barrett. The former needs a legitimate option outside Kevin Love while the latter thrives when all five men on the court function.

Where ever he goes, don't expect the transition from NCAA freshman to NBA rook to be as smooth as his transition to the college game.

Where do you want to see RJ Barrett play? When will his fellow teammates officially declare for draft? Tell us where you want the Duke freshman to go.