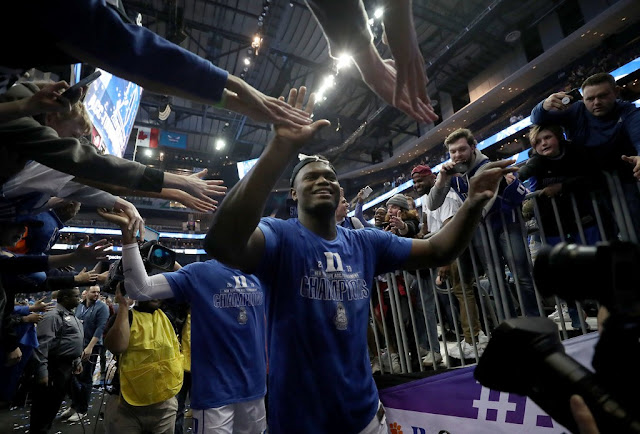 Zion Williamson continued his dominant performance in his return to Duke.

The freshman sensation scored 21 points as Duke wraps up a dominating three-game show at the Atlantic Coast Conference tournament.

The No. 5 ranked Duke beat No. 12 Florida State, 73-63, on Saturday night in the championship game in Charlotte, N.C.

Tre Jones also put on a series of strong performances. The Duke point guard closed out for the team, who didn't have Williamson for nearly six full games with a knee sprain

Duke is now preparing for an NCAA Tournament push.

The 29-5 Duke took control of the game after halftime. Florida State were spared no chances as Duke added a 21st tournament title to their conference-record total.

Duke shot 58 percent after the break, turning a 36-all score into a 14-point lead by midway through the half and then holding on. Mfiondu Kabengele scored 14 points for the Seminoles (27-7).

Despite missing a number of games, Williamson was named MVP of the tournament. He is only the sixth freshman to win the award.

It has been a long time since a freshman was named MVP.

Plenty of people are arguing the fact that Williamson has more than proved himself and should focus on the upcoming NBA draft.

Most were quick to point that our when he had to sit six games out due to a minor injury. Even analysts believed that Williamson's play carries the risk of him suffering a more serious injury that would falter his draft stock.

The consensus No.1 overall pick in the NBA draft was quick to respond after helping his team win the ACC tournament title.

It looks like Zion will be playing till the end of the season for Duke. Then, we can finally see him prepare for the 2019 NBA draft right?

Has Zion Williamson furthered his college basketball stint for too long? Should he still help Duke in the quest for the NCAA title? Leave a comment and let us know your thoughts.