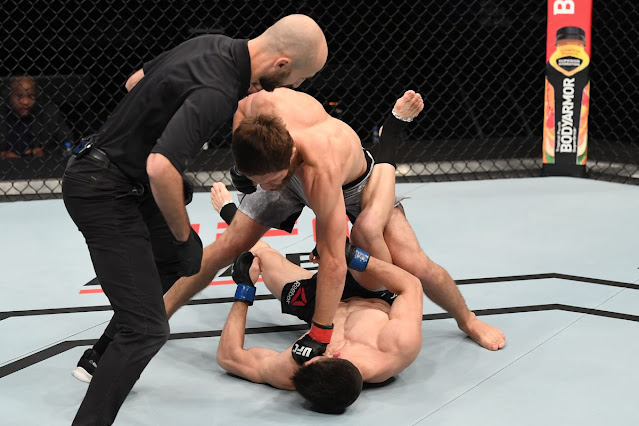 Said Nurmagomedov only needed 51 seconds to dispose of Mark Striegl.
Striegl's UFC debut was spoiled by the Russian on Sunday at UFC Fight Night: Ortega vs. The Korean Zombie in Fight Island. The Filipino-American got knocked out in the first-round.

It was Striegl's first loss in five years.

Nurmagomedov tagged Striegl with a  left hook which dropped the Filipino-American fighter. He followed it up with some accurate punches and vicious ground and pound before the referee put a stop to the contest.

"I just kept punching him until he fell and then I knocked him out,” Nurmagomedov said. “More to come [for me], I'm ready for top 10, top 15, I'm going to show much more," he added.

Striegl was scheduled to make his UFC debut in August but his opponent tested positive coronavirus which pushed plans back.

The Dagestan native still has a longer way to climb on his way to climbing the ladder. Finishing the debuting Striegl is only a small step.
As for the Fil-Am fighter, he needs to seriously reevaluate his style as many have come before him and didn't last long in the promotion. He can use some advice from fellow Filipino fighter Rolando Dy.
The UFC's bantamweight division isn't as heavily stacked as the heavier weight classes and Nurmagomedov hasn't made the top 15 yet. An top 11-15 opponent can be a good tuner whether he could break into the rankings.
It's something we're definitely going to look forward to.
For more SportNuz, click here for the latest updates.
Fight island MMA Nurmagomedov UFC