Pacquiao vs Thurman Preview: Can 'One Time' pull the upset? 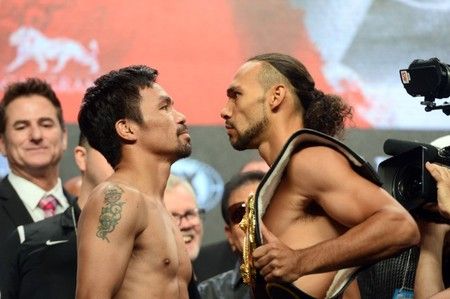 Though undefeated and has beated some heavy names in the past, Keith Thurman is still a virgin when it comes to boxing’s biggest stage.

The boxing world has possibly took notice when a young up and comer was knocking people out in the middle of the ring at the A La Carte Event Pavilion in Tampa, Florida.

29 wins later, he's fighting the greatest of all time himself: Manny Pacquiao.

Tale of the Tape

Pacquiao has won all he could possibly win in his 17-year professional boxing career.

We have seen legends fallen in his rise to the top. Now he could possibly be on the other end of it as he faces Thurman who is ten years his junior.

Thurman has a two-inch height and reach advantage over Pacquiao. Both fight on opposite stances with the former being an orthodox while the latter is a southpaw.

As far as ranking goes, Pacquiao is still Top 5 in his division while Thurman is still Top 10 in some rankings.

Thurman's fighting style is similar to that of the late Edwin Valero who relies on his heavy shots as his defensive strategy for attack.

It is worth noting that Pacquiao was once slated to fight Valero before he succumbed to legal and personal troubles which led to his demise.

Pacquiao still has to ability to run circles around his opponent but it only takes one heavy punch from Thurman to end the night.

Thurman has used his punching power as his defense for his whole career. He doesn't have an outstanding defensive strategy for a boxer and Pacquiao knows how to exploit that.

The problem however is that Pacquiao doesn't have the same will to finish an opponent like he used to. It it were ten to twelve years ago, he could have destroyed Thurman no doubt.

Usually when an opponent gets outclassed by Pacquiao in a fight, it goes the distance so unless Thurman is skilled enough to land a clean one, Pacquiao will take this fight to the distance.

Let's not forget that Pacquiao has found some of his power again lately.


Which side are you on? Pacquiao or Thurman? Comment down below who you pick to win.