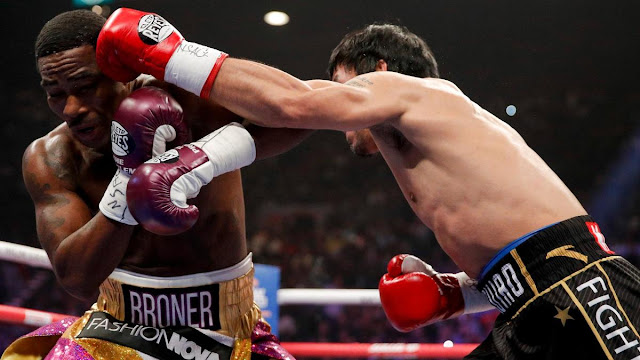 Manny Pacquiao is supposed to be past his prime but his recent performance just showed that he can still make it work in the ring.

The performance isn't the vintage Manny Pacquiao that people are still expecting he still has but it is enough to put on a clinic against Adrien Broner.

Broner did not even come close on the judges scorecards as Tim Cheatham and Glenn Feldman scored it 116-112 for Pacquiao, while Dave Moretti had it 117-111.

He showed little offense as he landed only 50 punches, according to CompuBox. That is about less than seven punches landed per round.

As for Pacquiao, his speed was still spot on as landed 112 of 568 punches. He put Broner on "survival mode" the entire time as the challenger seemed to be bothered by the champion's speed.

Despite the obvious outcome, Broner claims in the post fight interview that he is the actual winner. "I beat him," Broner said.

Furthermore, he stressed out that he won the last seven rounds, which did not sit well with the crowd in attendance in the MGM Grand.

Broner seems to be trying to make more buzz post fight but the results are obvious despite numerous replays.

Who's next for Pacquiao?

It seems like the most logical thing to do from a financial standpoint as the first fight generated around $600 million in what was the biggest in boxing history.

Any talks for a rematch of their 2015 encounter will definitely be a "Legacy vs Money" for Mayweather.

It's still Mayweather's fight to lose and if he is willing to risk his legacy for just a chance to top the last bout.

Mayweather doesn't look thrilled with the idea but the people want to see it, Pacquiao wants to do it.

It's just a matter of the final party to agree.


What do you think about Pacquiao's recent performance? Will we see him face Mayweather next? Leave a comment and let us know who you want to see Pacquiao fight next.