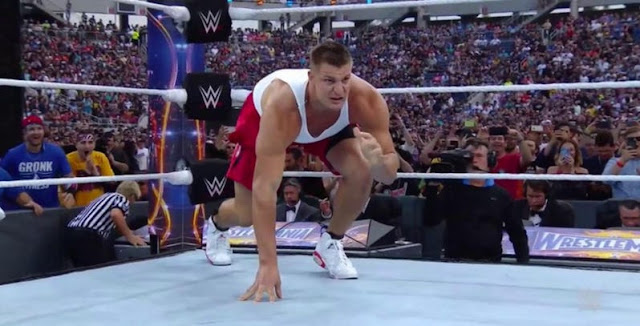 Rob Gronkowski is barely far from the NFL yet but another three-letter organization is already knocking.

WWE's first daughter Stephanie McMahon has let "The Gronk" know that he's welcome to join the company if he wishes.

The WWE's Chief Brand Officer made Gronkowski know through Twitter that the company's doors are always open for him.

The news comes after the the 29-year-old New England Patriots star announced his  retirement.


The former tight end closed the curtains on his NFL career this past Sunday after winning his third Super Bowl with the Patriots last month.

WIll Gronk take the offer?

Gronkowski has maintained a close friendship with WWE superstar Mojo Rawley. He has also been openly fond of the WWE.

"The Gronk" has made appearances for the company in the past which makes him familiar with the WWE set up. He was last seen helping his buddy Rawley win the Andre the Giant Battle Royal at WrestleMania.

"Yo, let's go, baby," Rawley said in a video message to the ex-Patriot. "It's time to turn up! The handcuffs are off!" he added.

WWE has a history of employing former NFL players through their developmental brand. The WWE Performance Center is filled with these former amateur and pro football players.

Some like Roman Reigns, Baron Corbin, and Rawley have made their marks on the main roster.

It is safe to say that Gronkowski will have an edge given his illustrious career as an NFL player.

He could even make a jump to the main roster faster by virtue of being a bigger name.

All he has to do is grab it.. or maybe wait a bit and be on the same batch as Conor McGregor?

Will Gronkowski take this huge offer? Will he team up with Rawley or will he spend some time in NXT first? Leave a comment and let us know where you want to see "The Gronk" next.