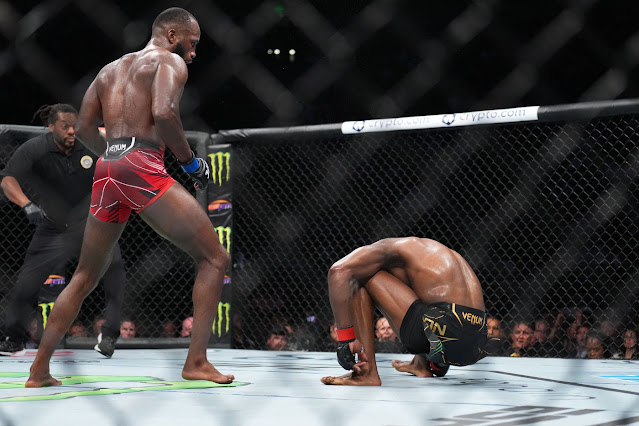 Leon Edwards prevented history from happening with a shocking KO victory over Kamaru Usman for the UFC welterweight belt.
Usman was less than a minute away from tying Anderson Silva's record of 16 consecutive under the UFC banner when Edwards landed a kick that put greatness to pause.
It was the challenger who created history of his own Saturday in the main event of UFC 278 at Vivint Arena in Salt Lake City, Utah.

Usman was on his way to victory with 56 seconds left in the clock when he caught a left kick to the head. Edwards recognized that the champion was out cold and didn't bother to follow his opponent to the ground.
It may have looked like a lucky kick rather than technique but it's going down in history as one of the most spectacular finishes. Edwards won via head kick KO at the 4:04 mark of the fifth round.

It was a long way for Edwards as people were doubting his ability to survive. He was saved by the bell in his fight against Nate Diaz and now, on his way to losing before the lucky kick.
“All the doubters said I couldn’t do it,” Edwards said in jubilation. “You all said I couldn’t do it. Well, look at me now. Look at me now!”
Edwards was performing well in the early rounds. He was the first fighter to take Usman down in his entire UFC career. The challenger stayed busy but Usman weathered the storm.

Usman then dominated Rounds 2, 3 and 4 to rally back from a slow first round. He was even winning round 5 before a kick out of nowhere landed square on his head.