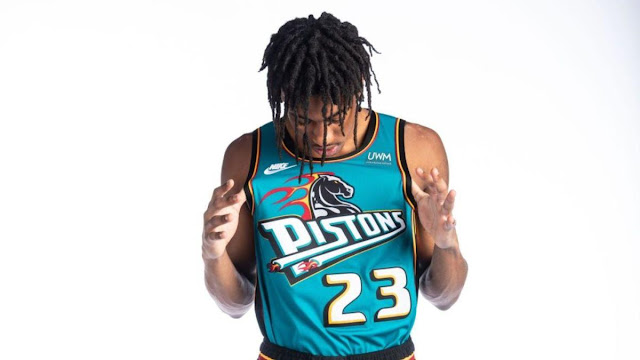 Motor City is going will be draped in teal again!
The Detroit Pistons will pay homage to their road uniforms with the classic teal replica. The team wore these uniforms from 1996 to 2001.

“To Pistons fans everywhere – we heard you, and this is for you,”

Mike Zavodsky, Chief Business Officer for the Pistons, gave in to popular demand as he decides to bring back these classic jerseys for six games.
“The teal jerseys represent a ‘colorful’ time in Pistons basketball and NBA history. We are thrilled to re-introduce the teal to a new generation of basketball fans and can’t wait to see this version of Detroit Basketball suit up in them,” Zavodsky said.
The Pistons had one of the nicest uniforms back then and the classic logo brings back memories for the hardcore fans.
Jersey sales are definitely going to skyrocket once these drips come out once again.

Wearing it with pride

It was dark years in Detroit when these jerseys were last worn. The Pistons weren't a successful team during the six years on these old uniforms.
While the team that wore these jerseys did not have the success of the Bad Boys era of the late-1980s and early 1990s, nor the '04 Pistons, the team wore these colors with pride, setting a blue collar culture for the team.

"Even though we were in the teal and the maroon at the time, it was still a fun era and I'm glad that the fans resonated with it," said former Pistons star Jerry Stackhouse.
For more SportNuz, click here for the latest updates.
Basketball News Detroit Pistons NBA