Former Alabama WR Calvin Ridley to step away from football 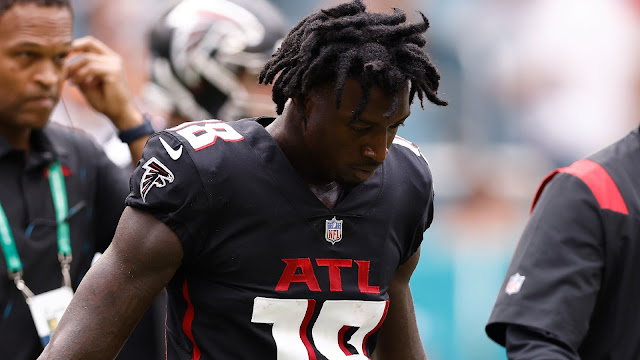 Calvin Ridley has indicated is intentions to step away from the sport.
The former Alabama wide receiver was a valuable asset to the Crimson Tide during his tenure at the Capstone. He played for coach Nick Saban from 2015 until 2018.

Ridley had some big shoes to fill when he arrived at Alabama. He was tasked to fill in the void that Amari Cooper left behind. He was able to live up to the pressure in his three years with the Crimson Tide.
During his time there, Ridley caught a grand total of 224 passes for a whopping 2,781 yards in his college career. The 6'1, 190-pound wide receiver also tallied 19 touchdown catches in 44 games.

Ridley's career in the NFL

The Atlanta Falcons took Ridley with the 26th pick of the 2018 NFL Draft. He played alongside fellow Crimson Tide alum Julio Jones until 2021.
Ridley was also able to deliver for the Falcons as he tallied more than 3,300 yards and 28 touchdowns throughout his stint there.
On Halloween morning, however, the sports world would receive a shocking revelation from the phenomenal wideout.

Ridley announced via Twitter that he was hanging up his cleats and stepping away from football for the foreseeable future.

While the news is shocking, it should be respected, especially if he’s doing it for his mental wellbeing.
For more SportNuz, click here for the latest updates
[author]Author. [/author]
American Football Calvin Ridley Football NFL