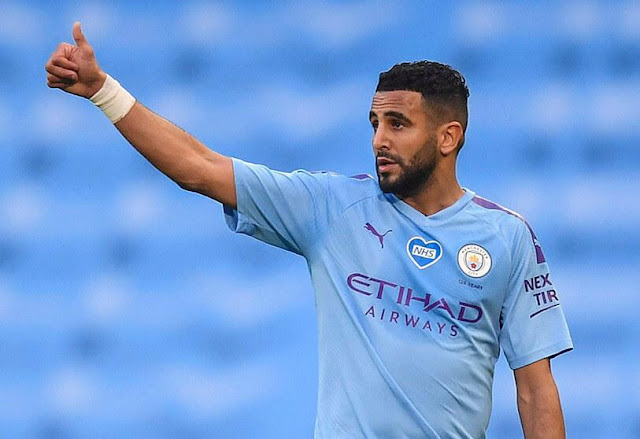 Riyad Mahrez continues to shine for Manchester City as they play against Burnley.
With an impressive record from over 13 games, Mahrez has had a lot of improvements to his game and continues to set his team to score goals.

Burnley vs. The Blues

The Blues have won 8 games against the Clarets. Burnley on the other hand, has yet to prove to get a winning strike in the Premiere League. City are real contenders to pick up another three points and extend their unbeaten start to the season, which has seen them win four of their first seven games.

There are some changes that need to happen. After playing for Brazil in the early hours of Friday morning, Ederson and Gabriel Jesus have both been ruled out.
The pair began the match and were scheduled to fly back to Manchester later that day, making the match against Burnley far too close. Riyad Mahrez is almost expected to take Jesus' place on the right wing, which means Jack Grealish could be assigned to the role of false nine.
After an excellent performance and a goal against Anfield, Phil Foden is expected to keep his starting spot on the left flank.

Mahrez has scored eight Premier League goals against Burnley, more than any other side in the competition. He can set the screen for other players to score goals while being a defender and ruling out possible chances for the opponents.
The 30-year-old Algerian has never been benched in a home match against the Clarets, which is good because he proves to be a player that is careful and healthy. He is determined to always stay in the game especially when it's at home, so he'll be eager to make an impact for the Citizens this weekend.
Mahrez also had an assist in Guardiola's side's 5-0 win over Burnley in the FA Cup fourth round last season. He has scored over 8 goals and has 2 assists and won 10 games in his career of 13.