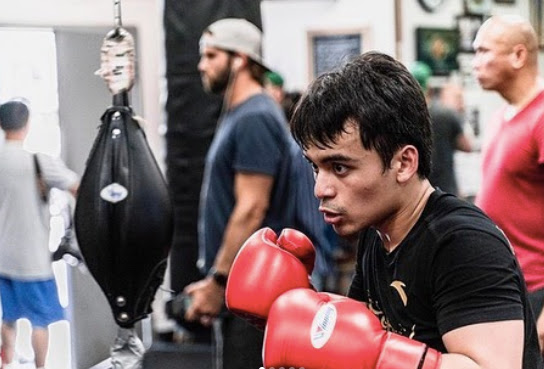 Emmanuel (Jimuel) Pacquiao Jr. takes the next generation of boxing to the next level as he is mentored by not only his father and formoer boxing legend, Manny Pacquiao but also professional boxing superstar, Canelo Alvarez.

Recently, a video of the 20 year old was posted on social media. It is scene that he is training and getting some reps with Alvarez and his coach. After declaring his campaign for the presidency of the Philippines in 2022, Pacquiao (62–8–2) formally retired from professional boxing in September. He won Keith Thurman, Adrien Broner, and Lucas Matthysse in his past five fights, but lost to Yordenis Ugas and Jeff Horn.So now his son clearly has the spirit to follow his footsteps and become the next great boxer in the family. He is definitely putting in work with Canelo Alvarez and is determined to make hi father and country proud by training to get up to that skilled fighter level.

A chance of a lifetime to show his given boxing talent

The father and son went to Alvarez's secret boxing gym in San Diego, California, where the young boxer displayed some of his father's ability. Eddy Reynoso, Alvarez's longtime trainer, put the young Pacquiao through the same grind and challenges as the current pound-for-pound No. 1 fighter. When Pacquaio was having hard time understanding the moves, Alvarez would step into the lesson and show him how to do the skillsets and punching techniques effectively.
Manny himself stated in early 2019 that he was discouraging Jimuel from joining the sport. "We're putting a lot of pressure on him. We don't have any boxing gloves or equipment in our house. I explained to him that I started boxing because we were poor." Pacquiao said to ABS-CBN News through ESPN Philippines, "It was a means for me to help my family."

However, the elder Pacquiao eventually gave in to Jimuel's ambition to perform and allowed him to train. So after training, Alvarez gifted Jimuel a pair of boxing gloves from his "No Boxing No Life" brand as an iconic remembrance that the 20 year old can draw inspiration from as he pursues his career in boxing.