Dallas Mavericks: On a winning energy this NBA preseason 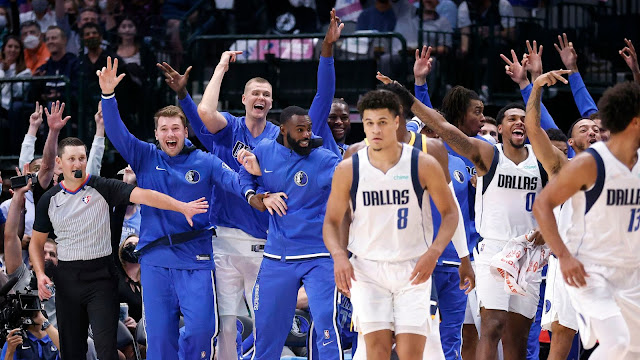 This NBA preseason, the Dallas Mavericks crushed the Charlotte Hornets with a 127-59 point game showing off their energy and winning spirit as Luka Doncic leads them to victory.

The Dallas Mavs woke up and chose violence against the Charlotte Hornets. After experiencing a disappointing and huge 68-point preseason loss, the Charlotte Hornets are in on some next level threat.
Doncic led his team to an incredible win and the Mavericks are proving early on that their a refined and stronger team to watch out for in this upcoming new season.

Crushing the the preseason. Luka Doncic and Kristaps Porzingis of the Mavericks are set and determined for the start of the upcoming regular season.

Dallas has now brought Charlotte the greatest preseason disaster between two NBA teams with their humiliating 68-point defeat. In addition, it was the second-largest preseason loss.

The Mavericks never marked the Hornets as Kristaps Porzingis took it away with a lead of a' 3-point jumper in the first minute of the game, scoring 61 points in the first half.
Mavs stars Doncic, Porzingis and a few more players to rest during the preseason finale
The last day of the preseason is here and the Mavericks will face last season's champions, the Milwaukee Bucks.

Wednesday's win against Charlotte was the Maverick's test run, so they're going into the last day of preseason with diligence. It was announced on Thursday that Luka Doncic and Kristaps Porzingis take a break and rest up in Milwaukee. Doncic had a solid performance in the first two preseason games, averaging 14.3 points, 7.3 assists, and 6.0 rebounds in 19.7 minutes per game.

According to the NBA's official injury report, Dallas will also be without Tim Hardaway Jr. (rest), Reggie Bullock (personal), and Tyrell Terry (personal), but that should not discourage fans from tuning in and expecting a fantastic performance from the rest of the players in the team.

Porzingis showed how much he's ready and determined to play and win during the game against the Hornets. Now, he and Doncic are an unstoppable duo once again in 19.3 minutes per game during the exhibition season, he averaged 13.0 points, 6.0 rebounds, 3.0 assists, and 1.7 blocks. KP also shot 58.3 percent from the field, indicating that he is settling into his new role under head coach Jason Kidd.

The preseason performance of the Dallas Mavericks' star layers earned them a lot of accolades and recognition. They are certain that they are prepared for the regular season, which begins on October 21 in Atlanta against the Hawks.
For more SportNuz, click here for the latest updates
[author]Author. [/author]
Dallas Mavericks Kristaps Porzingis Luka Doncic NBA NBA News