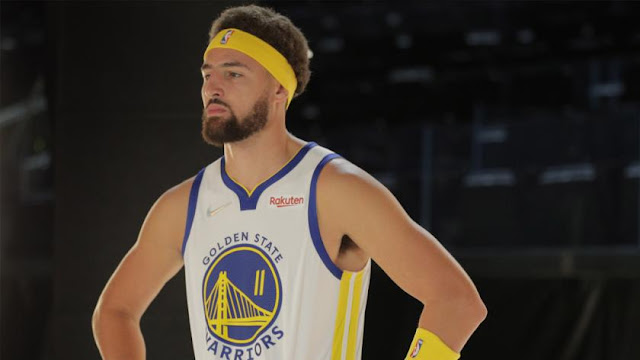 Klay Thompson suffered a terrible injury of a torn ACL that caused him to take a break from basketball for 2 years. With the help of the quarantine, Thompson was able to rest and recover as he slowly but surely got through his healing process.
With a lot of treatments, rehab, time, and especially patience, Klay is one step closer to being his normal self and getting back on the court to play for his team again. Over the last few months, he has shown his progress on recovery through his Instagram posts assuring fans that he’s still got his basketball mojo and is almost ready to be fully back again.
Recently he posted a training video of him shooting hoops without jumping and proving that he’s still got it. Fans and of course the Golden State Warriors miss him dearly and are very supportive of his recovery and are eager for him to return to play.

How Thompson’s injury benefits him as he comes back

In the event that Thompson is able to return to the court, his shooting accuracy and style is unlikely to have changed dramatically. He was a solid defender before suffering the injuries, but it's unclear how effective he'll be now that he's had two major operations on his lower body. Thompson tore his Achilles tendon in November last year, right before the NBA Draft, and his injuries have given him a greater hope of recovery than if he had not been injured.

Dr. Jonathan Kaplan told USA Today that Thompson's injury was more difficult to recover from since he ruptured his Achilles first and then tore his ACL later on. "The Achilles seems to be the more difficult injury to recover from, tends to need a lot more rehab from and can be set back by a knee issue. Tore Achilles tendon offers Klay extra time and the ability to fully recover and improve."

When Thompson tore his ACL in 2019 then tore his Achilles tendon in 2020, JaVale McGee explained that neither injury was caused by his hands.
Thompson’s arms and hands are still clearly in very good form as he constantly updates fans on his progress and there are clips of him shooting and practicing his shots on the court.
The Phoenix Suns center believes that Thompson will struggle when he returns to the lineup on defense. According to Essentially Sports, McGee told Shannon Sharpe on the "Club Shay Shay'' broadcast, "I expect the old Klay to speak the truth."
Because of Klay's energy and defensive ability, the one area where I see them struggling in the first month of the season is on defense. So I expect him to face challenges a bit on defense in his first month, but he didn't injure his arm while playing offensively. There's nothing wrong with that kid's arm, so he's definitely going to shoot."

Warriors fans may have to wait a little longer for Klay Thompson's comeback, as he is likely to miss the start of the 2021-22 season. As a result, the Warriors' sharpshooter should be able to recover to his well before form going forward. This is a really good point and smart observation that JaVale McGee brings up.

Recent footage of Klay Thompson practicing shots reflect that the Warriors star hasn't completely lost his shooting talent and basketball passion. He might still struggle on the court but he’s still a good offensive player and still one of the best shooters in the NBA.