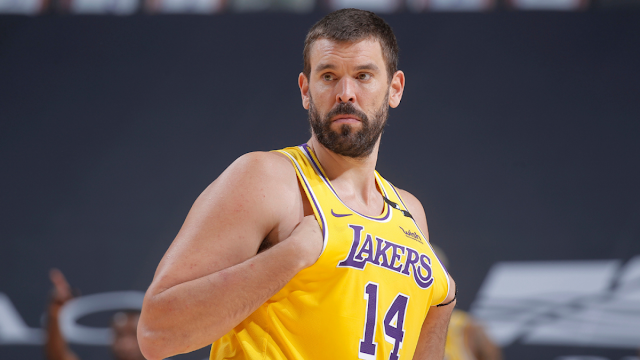 With the NBA offseason, teams are gathering players, giving better offers, and signing extensive deals to form a robust team in order to win the championship next season.
The Los Angeles Lakers are now lining up their roster and according to recent rumors, Marc Gasol's return to the team in 2021-22 is not guaranteed. There are a number of reasons why Marc Gasol is still a viable option. Last season, he was an inaccurate contributing member for the Lakers, and they may not be keen in building him up.

Lakers center Marc Gasol said after Spain's quarterfinal loss to the United States in the Olympics that the two-year contract he signed with the team last offseason would be his final season.

It's unclear if that signifies Gasol will be available to play for another team in the NBA or if he'll fulfill his potential overseas in Spain like his brother, Pau Gasol.

Charlotte Hornets’ interest in acquiring a veteran like Gasol

Who says being a senior player wouldn’t be useful anymore? Despite Marc Gasol’s age, he’s still a good fit for a young team like the Charlotte Hornets.
"Charlotte could use a veteran name in the frontcourt to provide depth and experience," according to Greg Patuto, who wrote in an article for NBA Analysis. Despite limited playing time, he proved his worth.
As a decent 3-point shooter, he is also a fine rebounder and rim protector on the court. The Lakers were better with him on the court last season, and he was part of some of the best line-ups.

It is possible that Gasol could represent as a great mentor to Kai Jones, whom the Hornets selected with the No. 19 overall pick in the 2021 NBA Draft, in addition to giving them another option at the starting center position

Plenty of NBA teams would love to acquire him if he remains in the league. Before the season, here are three teams that would be logical fits for Gasol.

Is Marc Gasol interested to play for the Charlotte Hornets?

As of now, there needs to be a meeting and a confirmation between the Lakers and the Hornets regarding a trade and contract deal for Marc Gasol. In his point of view, he'd rather play for a contending team at this point in his career than waste a season mentoring young players on a rebuilding team.

According to an interview with Esport 3 last year, Gasol has no desire to play for a team that is in rebuilding mode.

If ever Gasol does decide on continuing his basketball career in the NBA, there are still many teams that are interested in signing him, including one that could benefit from his experience and knowledge.

A big man is still needed. There is only one player on the roster who is listed as a center, and that is Brook Lopez. As a matter of fact, the Bucks would benefit greatly from acquiring a player of Marc Gasol's caliber. The team wouldn't miss a beat if he stepped in as a backup center behind Lopez. Because both are excellent 3-point shooters for centers, and both can block some shots defensively, he can have a similar impact.

As mentioned before, a young team like the Hornets could certainly benefit from a senior player like Gasol. Although they are not really under the category of a championship team yet, they could still be a fitting team worthy of Gasol's Commitment.

Despite having a big three of James Harden, Kyrie Irving, and Kevin Durant. The Nets lack a center, DeAndre Jordan is unlikely to stay in Brooklyn for the foreseeable future, so the Nets could use some more depth at the point guard position.

During the regular season, he was taken out of the starting lineup, and he didn't play a second in the playoffs either.
For more SportNuz, click here for the latest updates.