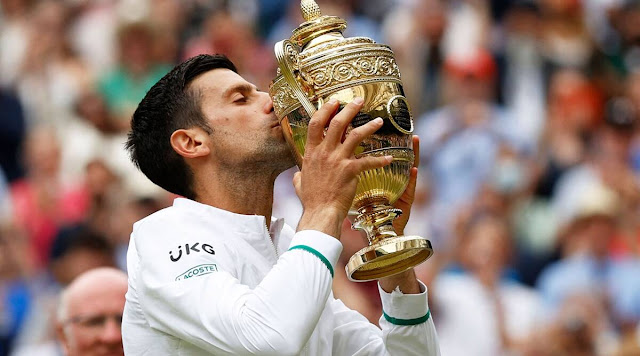 This is his 6th Wimbledon and his 20th Grand Slam, tying up with Roger Federer and Rafa Nadal. Djokovic takes a step closer to the prestigious Calendar Grand Slam and possibly the rare Golden Slam with his win.

“It was more than a battle,” Djokovic admitted after winning his 6th Wimbledon title against Berrettini.

However, Djokovic had a rough start. In the first set, Novak leads 5-2 when Berrettini resurrects in the game. Matteo Berrettini keeps on giving him a short but fast return down the corner. At the end of the first set, Matteo breaks the tie of 6-6 with a service ace.

The first set ends with a score of 7-6, in favor of Berrettini.

Nevertheless, Berrettini caught him up despite his 4-game lead. The Italian Hammer fought with Djokovic’s powerful attacks and undying endurance but lost the second and third set.

The last set was a neck-to-neck between the Serbian and Italian players. Berrettini again set up a fierce rally with Djokovic, leading 3-2. He gave it his best shot to return all the serves as much as possible.

But Djokovic picked up his pace and tied the last set, 3-3. Meanwhile, Berrettini didn’t give up and managed to tie the game with the hopes to win another three. Then on, Djokovic didn’t give him a chance to win a single game.

In the end, Djokovic used every bit of his remaining energy running the two-and-a-half-hour battle, outsmarting the Italian in his 6th and final game.

A dream come true for Djokovic

“I have to remind myself how special this is and not take this for granted,” Djokovic reminisced.

The 2021 Wimbledon Champion recalls himself as a young boy, making a Wimbledon trophy from scrap materials.

The champion also showed true sportsmanship by cheering his 25-year old opponent for a great career ahead.

“It’s not stopping here,” Djokovic declared. Now that he has leveled with the two of the greatest tennis players, Federer and Nadal.

Novak also paid tribute to Roger and Rafa as legends of tennis. He also mentioned how they became an inspiration throughout his career.

“They’ve helped me realize what I need to do in order to improve, get stronger mentally, physically, tactically,” Djokovic shared.

He won his second French Open last month, ninth Australian title in February, which leaves the ball running for the US Open.

Djokovic did mention that he would give the Calendar Grand Slam a shot. He also said that playing his best tennis at grand slams is the highest priority in his career.