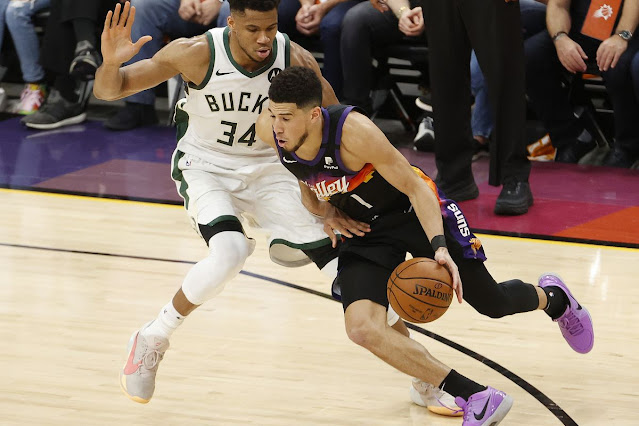 With the Phoenix Suns and Milwaukee Bucks on the road to winning their first championship, things are intense and everything is on the line for both teams.

Looking back on previous games

In Game 1 and 2, the Suns proved their strength and continued to live up to their name of being “the hottest team in the NBA” with a score of 118 points in both games in their home court as the Bucks struggled to keep up.

In Game 3 and 4, the Bucks ultimately fought back through Giannis Antetokounmpo’s leadership and commitment with 41 points in Game 3 plus a 57.1% on free throws as well as the motivating support from the fans at the homecourt. They kept proving how much they wanted to win with a successful victory at Game 4 with a total of 109 points making them tied with the Suns in this series.

In Game 4, Khris Middleton shined with 40 points, 6 rebounds, and 4 assists in 43 minutes along with the help from Antetokounmpo who had 26 points, 14 rebounds, and 8 assists despite Ayton’s best efforts in defending him. It was Bucks's third 40-point win in the Finals after Giannis scored more than 40 in Game 3.
It was rough during the first quarter with the Suns beating them and both teams struggled with steals and turnovers. Booker scored 42 points but struggled due to fouls so that still wasn’t enough to win because in the end, the Bucks took the win from home.

With how the series is looking so far, this isn't the first time that the Bucks have come back tying the series to 2-2 from 2-0. So we can expect an unexpected comeback from them.

The game returns to Arizona for Game 5. The stakes are high because homecourt advantage can be a big deal especially for the Suns with Game 5 being at home. But Giannis doesn’t hesitate to show dominance on defense and how determined he is to win. No team has lost in the series so far, but Milwaukee hopes to do this Saturday night.

The Milwaukee Bucks can prove that even though not all the players show effort, they can still win. But the Phoenix Suns are an extremely talented and hardworking team as well, guided by Chris Paul, inspired by Devin Booker, and supported by Deandre Ayton.
However, both teams struggle with the lack of aggressiveness from some of their players because there would be times wherein if the main character of the team loses their groove, it results in the other players being uninspired and nobody wants to step up anymore.

The outcomes may be different in Game 5. Giannis and the Bucks might have a firmer attempt on defense that would most likely be the outcome of a close game. But the Suns may bounce back again, and be more motivated to rain down some 3s and take the lead again.
It’s a close game, with both these teams giving an astonishing performance on both their home courts. So it’s going to be an exciting Game 5.
For more SportNuz, click here for the latest updates.
Milwaukee Bucks NBA Finals Phoenix Suns