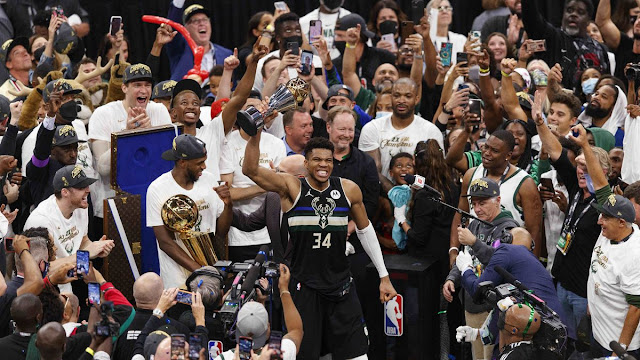 The Bucks won the NBA Finals 4-2 and were only the fifth team to win the best of the 7th series after losing the first two games.

The man, the myth, the Greek Freak, the MVP

Giannis Antetokounmpo scored a phenomenal performance and a career high that gave the Bucks a breath of fresh air with 50 points, 14 rebounds, and 2 assists all under 42 minutes proving just how determined he is to lead his team to victory.
He was rewarded as this year’s NBA most valuable player and was filled with emotions as he dedicated his win to his family and fans. Born in Athens, Greece and dubbed as the “Greek Freak”, Antetokounmpo became the seventh player to have at least 50 points in the championship round.

According to a tweet by the NBA, he was the first player to have at least 40 points, 10 rebounds and five blocks in a Finals' game since blocks were first recorded in 1974.
Despite getting hate and pressure from fans from the opposing teams by counting the time it takes for him to make free throws, Giannis had nothing but pride and discipline among himself and proved that he is a worthy champion after all. “Just believe in what you’re doing, keep working. Don’t let anybody tell you what you can be and what you can’t do.
People told me I can't make free throws. I made my free throws tonight & I'm a freakin' Champion!" said the MVP during an after game interview.

Having one of the most inspirational stories on his journey to becoming an NBA player, and ultimately a champion and MVP, Giannis was full of joy and couldn’t hold back the tears as he held on to his trophies and thanked the place and the people that made him come this far. "I want to thank Milwaukee for believing in me, thank my teammates," said Antetokounmpo after accepting the Finals MVP award.
"They played hard every freaking game. I trusted this team. I wanted to do it here in this city, I wanted to do it with these guys, so I'm happy. I'm happy that we were able to get it done."

The fight for the title

“These players, they’re champions everyday.” Bucks head coach Mike Budenholzer declared proudly in an on court interview. The Milwaukee Bucks defeat the Phoenix Suns with a tough yet well deserved win of 105-98 in Game 6. They proved that it’s not about forming a super team but about building strength, trust, and discipline among each other and within themselves. For the Suns on the other hand, they’ve come a long way and deserve all the respect. They gave it their all but it was still not enough.

"I think it's going to take me a minute. I just don't take it for granted. It's hard to get here and I wanted it so bad, you know. It's hard to process right now. It's hard. That's all." said Suns head coach Monty Williams, obviously heartbroken by the discouraging loss he and his team had faced.

Obviously Giannis also had some support across the game. Khris Middleton scored 17 points, 5 rebounds and assists. Plus the 16 points off the bench from Bobby Portis. As well as the added 12 points, 9 rebounds, and 11 assists by Jrue Holiday.

Chris Paul directed the Suns 26 points and 5 assists, with Devin Booker who had 19 points, 3 rebounds, and 5 assists. But it wasn't enough to win an NBA championship.
Both teams have started uncertainty and encountered mediocre shootings on both sides of the courtyard and struggled with many turnovers. Luckily, no player got seriously injured.
The Bucks led 29–16 by 13 points. In the period, Antetokounmpo had ten points and six rebounds. The Suns shot 7 in the quarter, with 24.
It was Phoenix's lowest total point in the 1st Quarter. However, Paul led a Suns Rally, scoring 10 points with Phoenix rapidly making it up for the gap and taking a lead of 47-42.
The Suns fought back in the 3rd quarter, with a 7-point lead but the Bucks got back with a 16-6 and their back in advantage.The quarter ended with the score tied at 77, while Antetokounmpo scored 20 pointsIn the end, it was Milwaukee who claimed the title and made their fans proud.
In the fourth quarter he had 13 more when the Bucks pulled off, including six consecutive points. Bucks Coach Mike Budenholzer praised the Suns, saying they had great players, a great coach and a great organization. Then he hailed his team.

Suns head coach Monty Williams entered the Bucks' locker room to congratulate the team and to thank them for a wonderful season it has been for his Suns team. Lots of respect and admiration for both of these coaches

Even with the pandemic still present, the Bucks' win kicked off a wild party for both a capacity crowd of 17,000 inside and the 65,000 supporters who attended a watch party outside the arena.
They made history by winning a championship since 1971 and have gained the respect of the entire NBA, raising their antlers, and being known to the world as champions.
For more SportNuz, click here for the latest updates
Milwaukee Bucks NBA NBA Finals