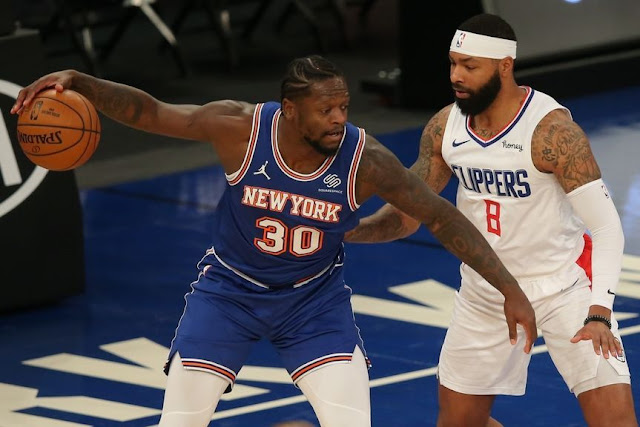 Julius Randle has been making strides with the New York Knicks this season. He's always good performances in hum but this year may be different.
The 26-year old continues to make a strong case to be named an All-Star this year. While intentional snobs happen, that will be hard if Randle continues to play the way he is
The Knicks are currently at 9-12. While the record is below .500, the East is known to make winning teams out of losing records. The team is just half a game back of the Charlotte Hornets for the No. 8 seed.

Randle has been on a tear all-season. He averages 22.4 points, 11.1 rebounds and six assists per game as the leader of a dysfunctional Knicks team. He seems to be putting everyone together with his versatile play.

The Eastern Conference is ironically stacked despite being a significantly weaker conference. Its front court slot is quite coveted.

If points per game have a bearing in voting, Randle currently ranks No. 8 among East front court players. The conference currently has Giannis Antetokounmpo, Kevin Durant, Joel Embiid, Jayson Tatum, Jerami Grant, Gordon Hayward and Nikola Vucevic in front of Randle.
He also has a case when it comes to rebounds at 11.1 per game. It puts him behind  ,  Andre Drummond (14.7), Clint Capela (14.5), Domantas Sabonis (12.2) and Antetokounmpo (11.4). Randle and Embiid are tied at 11.1.
Assists is Randle's strongest case at six. Khris Middleton and Sabonis are at 5.8 while Antetokounmpo and Durant are at 5.7 and 5.5, respectively

Will Randle make the All-Star team?

Some of the leading front court players are already surefire All-Stars. Voting may affect Randle's case too as New York hasn't gotten much love since Carmelo Anthony.
The least that can be done is have Randle as one of the reserve players or an injury replacement. The All-Star game is sadly not a game of regular season performance. Even the most undeserving get named to the team each year.
Just think about Bradley Beal who was blatantly disregarded despite averaging 28.7 points, 6.4 assists, and 4.5 rebounds last season.
For more SportsNuz, click here for the latest updates.
Julius Randle NBA NBA All-Star New York Knicks