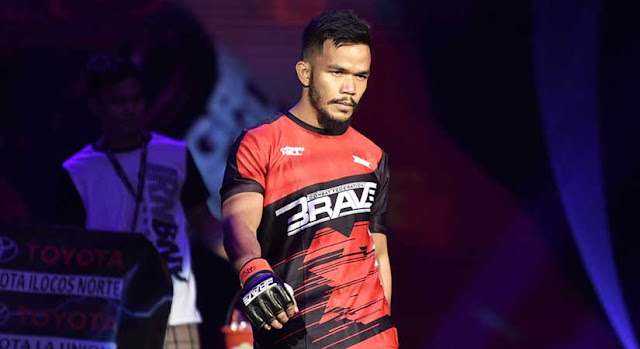 Brave CF's Fighter of the Year Rolando Dy has signed a new deal.
The Filipino mixed martial artist inked a new three-year contract with the promotion.This locks the 29-year-old Dy under under the BRAVE CF banner for the next five fights or more.
Dy currently competes in Brave CF's lightweight division, where he has done so since his first appearance with the promotion in 2017.

Dy was delightful at signing a contract extension.

"This organization took care of me when I was at the lowest point of my career as a professional fighter," Dy shared.
He even emphasized on how the promotion gave him an opportunity without hesitations. It was a new chapter in Dy's career as he now sees himself as one of the top fighters on the promotion.
"It's an honor to represent this organization on the global stage of this sport. I will surely do my best to give the fans and my supporters a performance to remember every time I step inside the cage," Dy concluded.

Dy has had an impressive 2020 campaign where he won both of his fights that year en route to being named the BRAVE CF Fighter of the Year award.
Struggling with cutting weight for the majority of his career, Dy made a wise move to go up in weight class and the returns went well.
He felt more on his natural weight class as he gave Polish knockout artist Maciek Gierszewsk a hard time during their fight at BRAVE CF 42 in September last year.

"I want that title shot in 2021," Dy declared.
He has indicated he will "keep knocking down" anybody the promotion puts on his way.
For more SportNuz, click here for the latest updates.
Brave CF MMA Rolando Dy