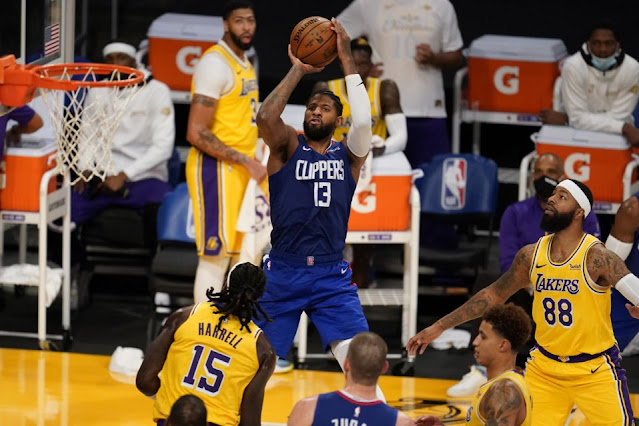 The Los Angeles Clippers spoiled ring night for their inner city rivals as they showed why they were the team to beat in the west last season.
Paul George scored 33 points while Kawhi Leonard chipped in 26 points as the Clippers rallied past the Lakers with the final score of 116-109 on Tuesday night.

George scored 26 of his 33 in the second half as he shot 13 of 18 in the field with five 3-pointers. He showed that he was worth the four-year, $190 million contract he signed with the Clippers.
The Clippers made sure new head coach Tyronn Lue won his coaching debut with the team.

The two Los Angeles teams were determined from the start. The Lakers wanted to prove their dominance after receiving their rings while the Clippers were in a quest for redemption after a second round exit in the playoff bubble.
The Lakers had their usual stars deliver as LeBron James scored 22 points while Anthony Davis added 18. James hurt his ankle in the second half, which limited him to just 28 minutes.
It was a short offseason for the Lakers as they only had 10 weeks to prepare from the time they beat the Miami Heat in the finals.
While the Clippers were on fire, Lakers coach Frank Vogel knew as well that he needed to save his stars for the long haul.

Serge Ibaka played well in his first game under the Clippers jersey as he scored 15 points. Nicholas Batum, who started for the Clippers as well three points and six assists in 28 minutes.
Swingman Luke Kennard made some buzz as well after signing a four-year, $64 million contract. Unfortunately, he only had four points in 21 minutes off the bench.
As for the Lakers, newly acquired Montrezl Harrell made a strong debut after moving from the Clippers to the Lakers. He scored 17 points and grabbed 10 rebounds in the game.
Pound guard Dennis Schroder tallied a near triple double in his Lakers debut he had 14 points, 12 rebounds and eight assists.
Marc Gasol and Wesley Matthews were the least impressive debutants. Gasol had no points and five fouls in 12 minutes despite starting the game. Matthews was scoreless off the bench in his Lakers debut.
We'll surely see adjustments in the next derby so expect a more entertaining matchup the next time these two teams meet.
For more SportNuz, click here for the latest updates.