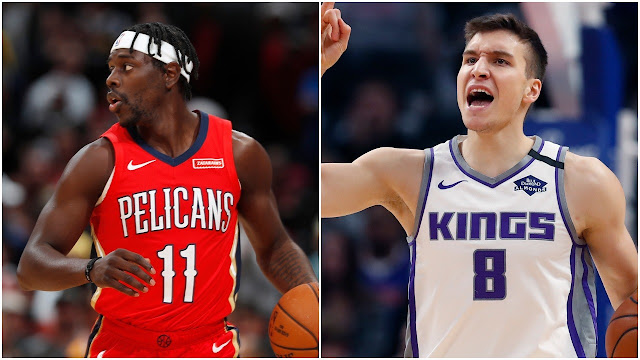 The Milwaukee Bucks are overhauling on scorers in an effort to keep reigning back-to-back MVP Giannis Antetokounmpo happy.
Sources have reported that the Bucks reached agreements on  New Orleans Pelicans guard Jrue Holiday and Sacramento Kings forward Bogdan Bogdanovic.
The team is in desperate mode after Antetokounmpo dropped hints of possibly leaving. The Greek superstar looked as if he isn't savvy over the five-year supermax extension that he qualifies for.

Bucks to acquire Holiday and Bogdanovic

Milwaukee will send Eric Bledsoe, George Hill and three first-round picks to the Pelicans in exchange for Holiday.
The Kings, on the other hand, is set to acquire Donte DiVincenzo, D.J. Wilson and Ersan Ilyasova for Bogdanovic

Multiple draft picks will be moving around as well in this deal.

How does Holiday fit the Bucks rotation?

The major pieces of the Bucks-Pelicans deal are the point guards.
Holiday is one of the best two-way guards in the league right now. He averaged 19.1 points and 6.7 assists last season.
In addition to these numbers are his accolades such as an NBA All-Defensive first-team selection in 2017-18 and a second-team selection in 2018-19.
He just missed being named to the team again last season but it still makes him one of the best defenders in the league.

The Bucks may be unloading two of their defensive point guards but at least they are getting one that has more offensive threat than the two combined.

How does Bogdanovic fit the Bucks rotation?

Speaking of offensive threats, Bogdanovic is another one. The versatile offensive wing has thrived in the modern NBA.
Bogdanovic has carved his place in the Kings' rotation as a volume 3-point shooter and effective playmaker. He and Khris Middleton will enjoy those kick out passes since Antetokounmpo no longer needs to force the ball in the paint when the zone closes in on him.
The Serbian guard averaged 15.1 points, 3.4 assists and 3.4 rebounds in 29 minutes per game last season.

Will this solve the Bucks' problems?

The team will have to work on this new flow of offense as Antetokopunmpo and Middleton will surely lose some of their touches in favor of these new offensive weapons.
Chemistry isn't that much of an issue in Milwaukee where they have built a family-like culture where they are enjoying as much as they're winning. It will be put to the test though due to Antetokounmpo's cryptic actions.
Holiday has been bailing out the Pelicans when needed. He's an underrated scorer who works well with his teammates.
Bogdanovic may have posted empty stats on a bad team but his playing style shows that he can still make the same production even with better teammates.
These lineups aren't going to be proven on paper. It's still best to wait and see how the team jells in this new rotation.
For more SportNuz, click here for the latest updates.
Bogdan Bogdanovic Jrue Holiday Milwaukee Bucks New Orleans Pelicans Sacramento Kings