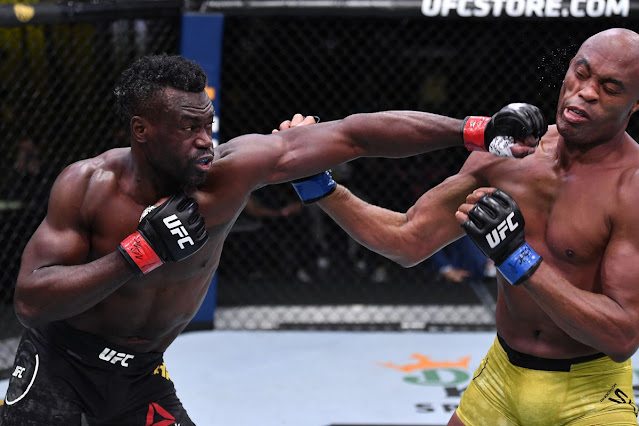 It was a match fight fans have been waiting for back when one was in his prime. It all happened regardless and a second torch was passed.
Anderson Silva was a shell of his former self but with flashes of old. It looked like he was about to pull off a storybook ending in what was his final UFC fight.
Then, Uriah Hall hit him with some guidance from Father Time.

Hall knocks Silva out in fourth round

Both Hall and Silva were at a feeling out stage early into the fight. Both knew that they were prone to being dropped so they calculated their shots.
It was towards the end of the third round where Hall dropped Silva and this was what increased his confidence moving into the championship rounds.
Though not for the belt, Hall's game was as sharp as a champion as he dropped Silva again in the fourth round and followed it up with strikes.
Referee Herb Dean put a stop to the contest at 1:24 of the fourth round.

Much respect and gratitude

Hall showed a ton of respect for his idol afterward. He went down and knelt in front of a defeated Silva to express his admiration and gratitude.

Silva also thanked Hall for the opportunity for one last fight as he gave his opponent his respect and blessing. It was indeed an emotional moment between two warriors.
Even Hall felt starstruck and humbled by the experience. He wasn't his usual overconfident self as he was scheduled for a date with greatness the moment the fight was announced.

Getting the champ's attention

Current UFC middleweight champion Israel Adesanya was also in awe with what happened. Even he was inspired to embark in the sport because of Silva.
The champion watched from cageside and stood and applauded once Silva left the Octagon for the final time. Of course he also took notice of one of his possible matchups in the future.
It was all about Silva's last hoorah at the end of the day. Discussions and banter for a potential Adesanya vs Hall match can wait.
The remaining time of that night was Silva's despite the loss.
For more SportNuz, click here for the latest updates.
Anderson Silva MMA UFC Uriah Hall