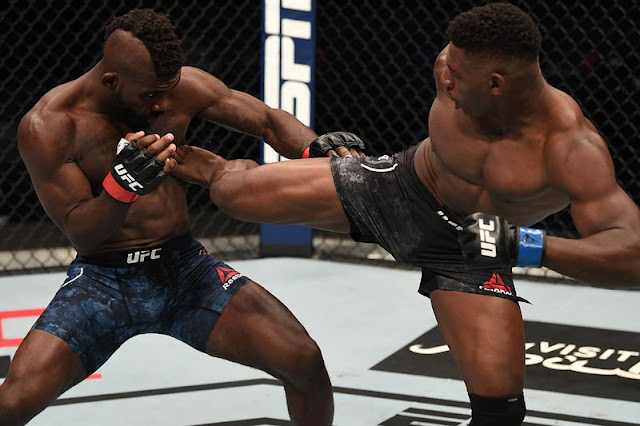 The UFC has its share of historic knockouts. It just so happens that it comes from the least expected person on the most unexpected events.
Just like Joaquin Buckley’s spinning back kick KO of Impa Kasanganay. The empathic knockout came out of nowhere at at UFC Fight Island 5 in Abu Dhabi.
It has already made its mark in MMA history and it still looks unbelievable three days after it happened.

It was a back and fourth middleweight fight which could have gone either way if not for the spectacular kick. It was a little past the midway part of Round 2  when it happened.

Kasanganay looked like he did excellent defensive work by catching Buckley’s kick and holding his foot. Buckley unexpectedly had more athleticism than anticipated as he circled 360 degrees and kicked Kasanganay with his free foot squarely in the face. Kasanganay fell like dead weight on the canvass prompting Kevin Sataki to call the fight's end.
Even UFC president Dana White didn't believe his eyes as he watched the fight in his locker room in the back.

“We were just talking about whether we should give him all of the bonuses right now,” White said. “The athleticism required to do what he did, that is crazy,” he added.

The knockout is arguably top 5 in MMA history.
Such highlight reel finishes come when unexpected just like when Uriah Hall hit a spinning back kick KO on Adam Cella in “The Ultimate Fighter.”
Then, there was Edson Barboza’s head kick KO of Terry Etim back when the Brazilian was just a preliminary carder.
There are a lot more spectacular finishes coming from lesser-known names in the sport, let alone the UFC.
Buckley's will surely be a mainstay in video highlights for decades to come.
For more SportNuz, click here for the latest updates