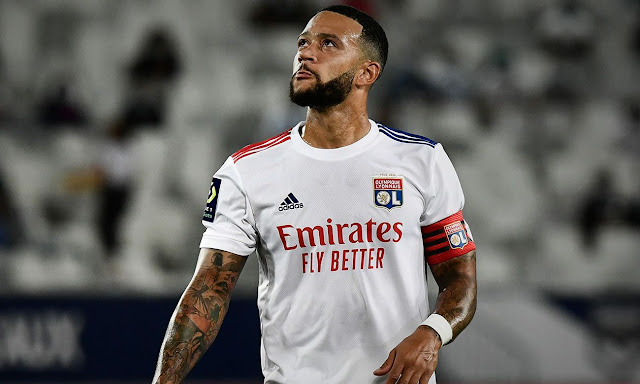 The transfer of Barcelona striker Luis Suarez is not yet a done deal but the newly appointed Dutch Manager Ronald Koeman is already keen on a replacement for him.

Reports suggest that compatriot Dutchman Memphis Depay is set to suit up for the Catalan side after having a successful resurgence in Lyon.

The 26-year-old Dutchman transferred to Lyon in 2017 after having a disastrous spell in Manchester United. He has been on a resurgence in his career ever since by scoring 57 goals in 140 appearances.

It is reported that the transfer of the Dutchman will be worth €25 million and another €5 million to be paid next season.

Good bargain for his quality and potential

Depay is only 26-year-old and yet to enter his peak years, but he already has plenty of experience for his age having appeared in the national team and having played in difference countries and clubs such as PSV, Manchester United, and Lyon.

Playing alongside Lionel Messi, one of the best football players ever, will have a great impact in unleashing the potential of the Dutchman.

Newly-appointed Barcelona manager Ronald Koeman is dutch himself. Hence, Depay will not have a hard time adjusting in his new team.

In addition, this is not the first time that they will work as coach and player as Koeman was able to coach him in the national team before.

Dutch players has a long history of success in Barcelona having the likes of Kluivert, Mark Van Bommel, even Koeman himself and one of the most iconic Barcelona players Johan Cruyff who influenced the style of play of the team as we know it now.

Depay and Koeman will hope that the they can continue the tradition of success of Dutchmen in Barcelona.

Versatility to play in different positions

Depay is a flexible attacker, he can play almost anywhere in attack. As a left winger, right winger or even as a striker.

With his great physical ability, he can fill the role of Luis Suarez centrally. While if Koeman opts to play Messi as a false nine, Depay can shift as a winger alongside Antoine Griezman.

Depay can fill a lot of positions in the starting eleven. He can give Koeman a lot of options depending on opposing teams they face.

The transfer of the 26-year-old attacker is surely a great addition to the team. His versatility, physicality and technical ability will be a great boost for the Koeman-led squad.