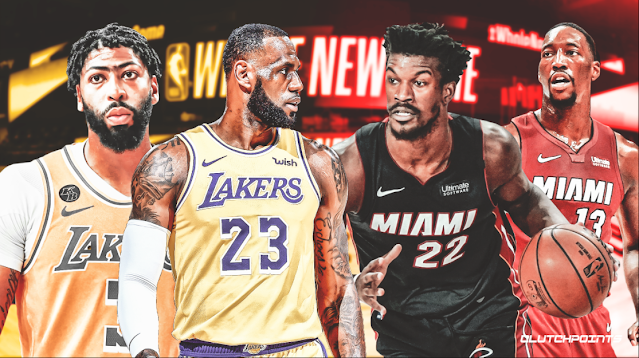 This year’s NBA finals is a surprising one, at least for the non-Heat fans. Everyone could have predicted that the Lakers will be here, but the Heat is a surprise for some.

The Lakers had to breeze through the feisty Portland Trailblazer, the 2 MVP-led Houston Rockets, and the upcoming powerhouse Denver Nuggets.

While the Miami heat swept the Pacers, and almost did the same with the number one seed Milwaukee Bucks and of the most talented teams in the East in the Boston Celtics.

The Lakers vs Heat match up is not just an ordinary one. There are interesting story lines and exciting player matchups to look forward to which will be discussed later.

They may not face on the court, but they have a score to settle. At least on the part of Riley.

In the 2010, LeBron joined the Miami heat to form the “Big Three” with Wade and Bosh orc
hestrated by the riley himself. However, LeBron left the Heat in 2014 to return to Cleveland.

This did not sit well with Riley as he believed that they could have at least won 2 or more if he stayed. Riley took it personally that his best player left him dry, leaving his championship hopes.

"I was silent, I didn't say anything. My mind began to just go. And it was over. I was very angry when LeBron left. It was personal for me. It just was.” said Riley

“I had a very good friend who talked me off the ledge and kept me from going out there and saying something like Dan Gilbert. I'm glad I didn't do it." added by the Heat President.

Knowing Pat Riley as a competitor, expect him to push his team further and get back at Lebron.

The rivalry between the two will continue although they now belong to respective new teams. It started from their first match up during James’ return to Cleveland and the rest is history.

However, this time they will meet again older than they first met. Iguodala is already 36 while James is already 35, although the latter is still playing at the highest level and still the best player in the league.

While the former Golden State Warrior, although not at the same level anymore, can still contribute to the Heat being one of the most experienced guys in the team. If anyone knows how to guard James, it would be him.

We have to appreciate this match up as we might not see it again especially because of their age. Only one of them will have one more championship than the other as both of them already have three rings.

Other Notable story lines to watch out

One interesting story line is that of curious case of Dion Waiters. He played with the Heat at the start of the season before he was traded due to his falling out with the organization.

The former heat guard was suspended on difference occasion by the Heat management for different reasons. Eventually, he got traded and waived until he was picked up by the Lakers.

Reports say that whoever wins the title, Waiters have a guaranteed ring. That is an interesting scenario, but will the Heat give him the ring after all those fiasco?

Another notable storyline is that of Tyler Herro vs Kyle Kuzma. You might wonder what story lies between them. Both of them have a common denominator and that is Katya Elise.

Katya Elise was Kuzma’s ex-girlfriend and now the current girlfriend of Heat Guard Tyler Herro. There is no beef between them, but it is still interesting to see them guard each other on the court.
For more SportNuz, click here for the latest updates
Los Angeles Lakers Miami Heat NBA NBA Finals