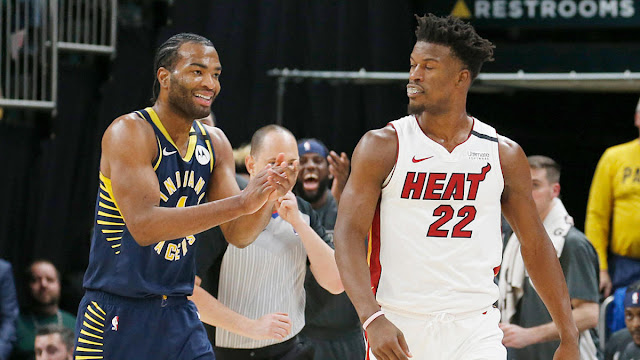 The rivalry between Miami Heat's Jimmy Butler and Indiana Pacer's Tj Warren just got exciting as the latter has been the best player ever since the NBA Restart.

To freshen your memory of how the feud started between the two, it all started sometime in January when the two teams met.

Butler vs Warren: The Beginning

Butler did not like how he was fouled by Warren in one play, they exchanged words then both got a technical foul. However, it did not stop there when Butler committed an offensive foul, and to put fuel to the already burning fire, Warren clapped to Butler's face as if showing his joy for the call.

That's the time when the altercation started, foul words were exchanged once again, Warren even raised a middle finger that caused his second technical foul and subsequent ejection. The altercation ended with a flying kiss for Butler and a win for the Miami Heat.

If you think the exciting rivalry ends there, you are mistaken. It seems more is to come as the two teams will meet twice in the Bubble.

The two social media accounts of both teams are even riding the hype. Upon the release of the schedule, the Heat's Twitter account tweeted: " Definitely ready" and the Pacer's responded by tweeting "see you".

Ever since the restart, TJ warren has been the league's MVP, exploding to 53 points against another Eastern Conference Playoff team in the Philadelphia 76ers. The Sixers just did not have any answer to Warren. Then scoring 34 points and 32 points against the Wizards and the Magic, respectively.

The scoring run has also broken records along the way. He is one of only three players in the NBA to have scored 115 and more points with a 75 and above eFG% over a three-game span joining Curry and Durant as per the report by Justin Kubatko.

Warren joins Curry and Thompson as the only players with 50+ points while taking fewer than 5 free throw attempts since 2010 as reported by StatMuse.

Butler made remarks after the altercation that they are not on the same level, but now it seems Warren is trying to close the gap before they meet again.

In terms of form, Warren has the advantage, as obviously shown by his hot start while Butler is somehow in a slump as he has missed two games in a row now. But knowing Butler, he is a competitor, he will accept this challenge gracefully.

Let us just all hope that he is well and healthy when they meet again as aside from the two Bubble matchups, there is also a big possibility of a first-round matchup.

Let's hope for the best.