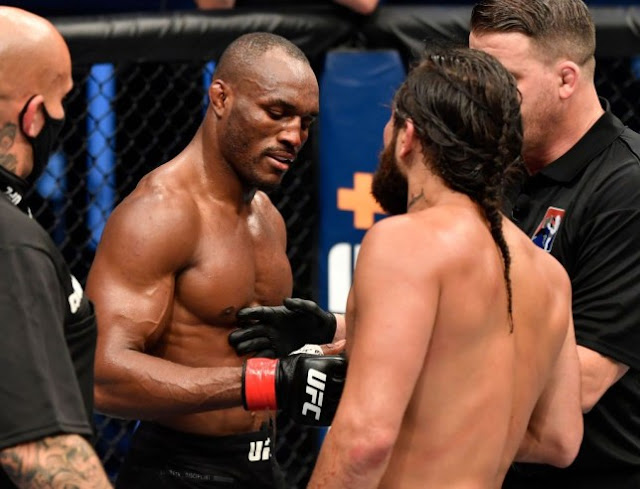 The main event of UFC 251 in Abu Dhabi proved to be a show as the entire five round affair wasn't boring at all.

Usman, a former national champion collegiate wrestler showed crispness of the feet while mixing it up with the former backyard fighter.

The welterweight champ had a full training camp for Gilbert Burns before COVID-19 changed plans for the challenger. Masvidal stepped in only on six days’ notice.

"Gamebred" was still training for a possible fight regardless which showed as he was able to hold his own despite not training a full camp for Usman.

The heated buildup turned into a semi one-sided fight as Usman mad use of his proficient wrestling and clinch work to control Masvidal's unpredictable striking.

"‘Gamebred’ is the biggest, baddest dude out there right now,” Usman said.

“I had to take six years to prepare for him on six days’ notice," the champion added.

Usman also knew Masvidal was was preparing. "All these guys are preparing for one guy, and that’s me at the top of the mountain," he explained.

Usman is now in the conversation for St. Pierre-level greatness. His superior wrestling and seldom-noticed striking is one.

The welterweight champion has beaten the top guys in the division including Masvidal, Colby Covington, Tyron Woodley, Leon Edwards and Rafael dos Anjos, among others.

So did St. Pierre with the greatest welterweights UFC ever had in history.

Burns is the only logical next challenger since he's the current No. 1 contender but his current situation will hold him back for at least a year.

The only logical next option is somebody outside the top 10 that can draw some numbers in the new crowd less UFC normal.

Choices that come to mind are Nate Diaz, Robbie Lawler, and Anthony Pettis. A Colby Covington rematch might work too if they seek someone ranked higher.

Usman already made it clear that he'll be spending more time with his family while waiting for the worldwide pandemic crisis to ease down a bit.

Whoever is next in line should take notice of greatness ahead and train harder than their current training pace.