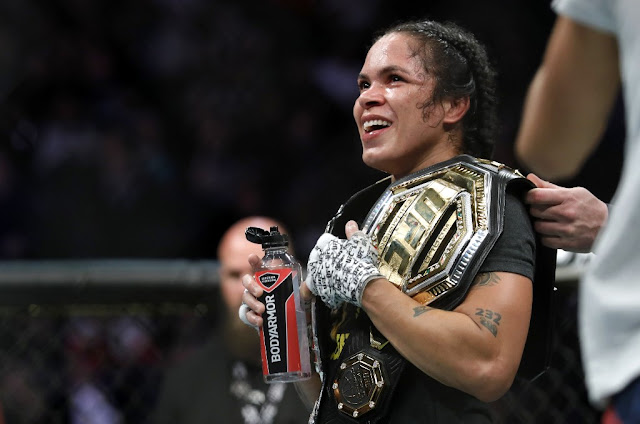 She's a double winner. Not only did she win another successful title defense, she's having a baby on the way.

Right now UFC dual-champion is thinking about retirement at this point. She's cleaned out the best in two divisions with deserving challengers seemingly a long shot right now.

Nunes has accomplished a lot in the sport. She's dominated bother the bantamweight and featherweight division. She's even broke barriers showing that biological women with a colored gender can shine no matter of preference.

Another dilemma Nunes might be facing is wasting her prime facing deserving contenders of lesser talent. Shall she continue, her body might give out once a better challenge emerges.

Nunes has just gotten off a victory over former Invicta FC champion Felicia Spencer at UFC 250. She indicated afterward that she might take the rest of the year off.

The UFC double women's champion is expecting her first child with partner, Nina Ansaroff. The couple named their baby Raegan Ann Nunes and is due September.

“A break for sure,” Nunes said when asked what was next following UFC 250. “I have to see what’s going on with my legs. I always get hurt with this leg. I don’t know what’s going on. And my baby is coming in three months, she’s going to be here. I have to organize a lot of things, her room, and I really need a break right now. I think maybe off (the rest of 2020) for sure.”

Nothing left to do

Right now, there's nothing left to do for Nunes. She's dropped hints that she might actually move beyond active competition.

“Ah, I don’t know (what's next). I’ve achieved everything I wanted. I’m well. I can go on with my life, maybe (take) a new step, maybe find new talents, help some girls there, maybe be a coach, too," Nunes said.

Nunes is already one of the greatest regardless. Quitting while ahead isn't such a bad idea.

She might need some advice from Georges St. Pierre though if she really is sure about her decision.

Should Amanda Nunes retire? What else is there left for the greatest female fighter? Let us know what you think.