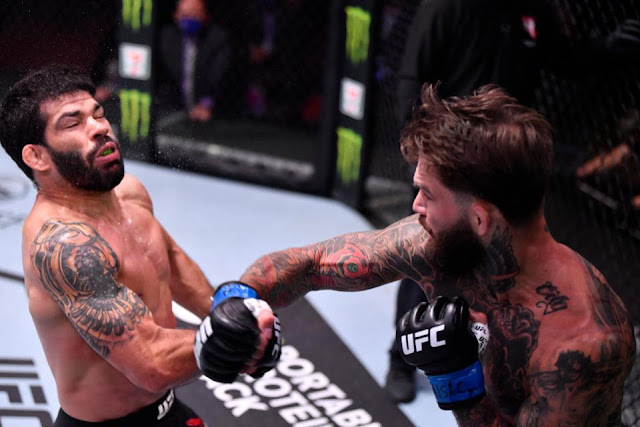 Cody Garbrandt hasn't won for quite a while but he made his way back to the win column in highlight reel fashion.

Garbrandt co-main evented UFC 250 opposite long-time contender Raphael Assuncao in a bantamweight bout. One wants to regain lost momentum while the other had to ride on an extended version.
‘No Love’ was on a three-fight losing skid where he got knocked out in all three. Garbrandt hasn't won since 2016 when he won the bantamweight title from Dominick Cruz.

Assuncao, on the other hand, was playing with momentum as he finds himself in the mix for a title shot only to lose somehow. He went to Saturday's contest on a two-fight losing skid.

Apparently, both fighters had something to fight for.

It wasn't high-octane once round one kicked off. The two were feeling out each other trading kicks and punches as both fighters had good hits.

Round two starts and Garbrandt looked to mixed it up after scrambling from a takedown attempt to land a good left hand. Assuncao was seemingly feeling the accumulated hits to his lead leg in the first round.

Garbrandt connects with a good body kick upon which, Assuncao partially connects with a right hand. A series of wild flurries later, it looked like both are going to slug things out going towards the end of the round.

Then in an expected twist in an unexpected moment, the two looked to trade towards the end of the second round when Assuncao came charging. Garbrandt ducked from a punch and threw a counter of his own which landed to Assuncao's face cleanly right as the buzzer sounded.

Assuncao was asleep just as Garbrandt walked to his corner.

The spectacular KO finish doesn't constitute to immediate title shot. Garbrandt will have to rack up wins again especially after dropping his prior three.

As for Assuncao, he finds himself in familiar territory again where he alternates steps forward and steps backward. This loss should make him reevaluate his next moves.

Ajamain Sterling won his fight in the same card. It would be interesting to see him and Garbrandt clash styles. There's also Marlon Moraes who can give the Team Alpha male member a scrap.

Given the current pandemic, the fighters are definitely going to have ample time to make negotiations and prepare for their respective fights.

Who should Garbrandt face next? Does he deserve an immediate title shot after the KO win? Let us know in the comments below.