Knicks highly interested in LaMelo Ball. Places him as top point guard on their draft board 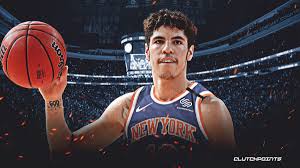 The best Ball brother might just be the solution for the worst team of the decade.

The New York Knicks might not be the worst record-wise but allegedly losing games intentionally and end up losing the best draft pick of the decade probably puts them here.

They might finally get what they want if they end up in the draft selection they are poised to land.

The Knicks are poised to go as low as top 5 in the 2020 NBA draft. They plan to use whichever pick they land on LaMelo Ball.

Though they might go with a higher-ranked prospect given the chance, the team has Ball as their top point guard option.

Ball has a huge upside. Although it may sound cliche, we might have forgotten that he is actually the best of all three Ball brothers and the statistics showed that.

LaMelo used to be a pure high-volume scorer. The fact that he was able to add some playmaking ability like his brother Lonzo during his stint in Australia makes him more of a complete player now.

Ball is a 6’7″ guard who has fantastic handles and elite court vision. He has a dangerous pick-and-roll game that can provide a Trae Young type of offensive impact.

Despite the improved arsenal, Ball still struggles with consistency especially from beyond the arc. He's still a below average defender and people are questioning his work ethic.

For sure Ball made significant improvements in Australia but the difference in competition are still making scouts skeptical.

Will the Knicks take the risk?

It's not like Knicks organization has a track record of being the best decision makers. They can take a big swing on Ball and still live with it if they don't hit a home run.

Ball is the top point guard on the team’s draft board despite other guards such as Anthony Edwards, Cole Anthony, and RJ Hampton as viable options.

Another risk to consider is LaMelo's father Lavar Ball.

The outspoken stage father of the Ball brothers can be a handful to deal with, so much so that the Lakers were forced to choose Lonzo over Kyle Kuzma in the Anthony Davis trade package.

New York is an infamous for its heavy media presence which is something the Ball patriarch wants but the team doesn't need.

We'll all find out if the Knicks are willing to take the risk and the extra baggage that comes with it on the day of the draft itself.

Will the Knicks make a splash on LaMelo? Should they consider other options if they earn a higher draft spot? Leave a comment and tell us your thoughts.