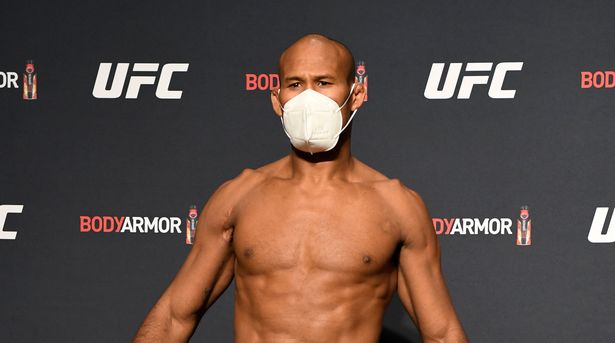 MMA fighters managed to fight coronavirus but unfortunately, one UFC soldier got wounded in the process.

UFC 249 competitor Ronaldo "Jacare" Souza became the first UFC fighter to test positive for COVID-19. It came ahead of his scheduled bout against Uriah Hall.

UFC Executive Vice President and Chief Business Officer Hunter Campbell said that the rest of the event will continue as planned.

Only the Jacare vs. Hall will get scratched off the card.

Jacare reportedly drove from Orlando to Jacksonville for the bout. He notified UFC staff about a family member that tested positive.

This led to medical staff testing him for COVID-19 upon arrival. Jacare was quarantined as he underwent daily health checks.

He appeared at Friday's weigh-in wearing a mask while maintaining necessary social distance during the staredown with Hall.

Like Jacare, his two cornermen were currently asymptomatic before precautionary tests found them to be positive as well.

"All three men have left the host hotel and will be self-isolating off premises, where UFC’s medical team will monitor their conditions remotely and will provide assistance with any necessary treatment,"UFC wrote in a statement.

"From their arrival earlier in the week until their departure today, Souza and his cornermen followed UFC health and safety protocols, including practicing social distancing, wearing personnel protective equipment, and self-isolating whenever possible," the UFC shared.

No other competitor participating in UFC 249 tested positive COVID-19 according to the promotion.

FSAC impressed with the UFC

The Florida State Athletic Commission (FSAC) approved the continuation of the remainder of the card.

FSAC executive director Patrick Cunningham was quoted saying "We're very impressed with your entire process. You have our full support. We have no reservations about the event going on tomorrow. We think this is the template for combat sports moving forward."

"If you do 1,200 tests, it's not that unexpected to have one come back positive," he said. If anything, he noted to Hill that they have good protocols in place," he said.

Good news is that the main event of Saturday's UFC 249 card featuring the interim lightweight title between No. 1-ranked lightweight contender Tony Ferguson and No. 4-ranked Justin Gaethje will still happen.


We wish Ronaldo "Jacare" Souza and his team a speedy recovery. What do you think about UFC's safe protocols? Let us know your thoughts.