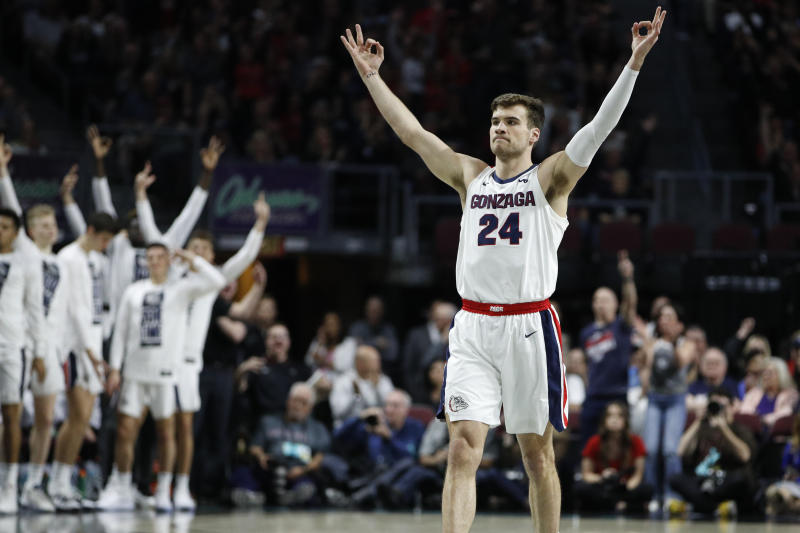 NCAA basketball is all about upsets. No powerhouse team is safe from defeat once March hits.

Just ask Saint Mary’s who almost pulled off another upset this year at Orleans Arena. They knocked off Gonzaga in the West Coast Conference tournament championship game last year.

Unfortunately for the Gaels, they weren't able to repeat this year. Saint Mary's rallied back from deficit with an 8-0 run to bring the lead down just one before halftime Tuesday night in Las Vegas.

The No. 1 ranked Gonzaga pulled away in the second half to beat No. 3 ranked Saint Mary’s 84-66 to win their 18th WCC tournament title.

Joel Ayayi led Gonzaga with 17 points and seven rebounds. Drew Timme had 17 points off the bench on 7-of-8 shooting from the field. Corey Kispert added 12 points, and Filip Petrusev had a double-double with 10 points and 14 rebounds.
Jordan Ford led the St. Mary's with 27 points 7-of-15 shooting while Malik Fitts finished with 17 points and nine rebounds.

Gonzaga will most likely enter the NCAA tournament with the No. 1 seed, which will be their third time in four years in that top spot.

The in-state rivalry in North Dakota didn't look like it was the Summit League tournament championship game.

It was North Dakota State's game since the start. The Bisons went on a massive 21-2 run to cruise to a 89-53 win over the North Dakota Fighting Hawks.

The win earns North Dakota State a spot in the NCAA tournament for the second straight year.

Hofstra can finally live up to being the Pride as they are finally going to the Big Dance after almost two decades. The last time Hofstra went to March Madness was in 2001.

The Pride cruised past Drexel and Delaware before beating the No. 6 seeded Northeastern 70-61 to win the CAA tournament. The win also gives them an automatic seat at the NCAA tournament bracket.

The Norse almost squandered an early double-digit lead disappear in the second half of their game against UIC. Northern Kentucky managed to maintain composure as they made it past the Flames with the final score of 71-62.

Northern Kentucky will go back to the NCAA tournament for the third time in four years after winning the Horizon League.

Robert Morris ended a five-year drought after making a huge push in the second half against St. Francis.

The Colonials mounted a 19-point lead en-route to a 77-67 victory over the Red Flash. Robert Morris won their ninth Northeast Conference championship the process.

Who among the winners will go far in the NCAA tournament? Will these smaller schools score a huge upset come March Madness? Let's talk about college basketball in the comments section.