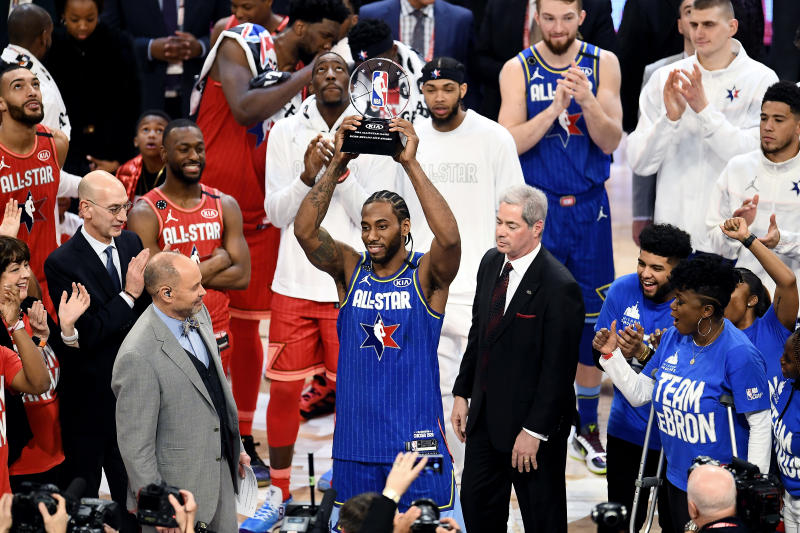 Honoring Kobe Bryant in a new All-Star game format made it more competitive than ever. Bodies were banging as calls and non-calls were being questioned just like your normal NBA game.

The fourth quarter was intense. It all boiled down to the final moments as players from both Team Giannis and Team LeBron didn't hold back.

In the end, Chicago native Anthony Davis scored the game point with one free throw.

Kawhi Leonard set an All-Starr game record for threes made as he took home the game’s MVP with 30 points for Team LeBron. The team captain, together with Chris Paul scored 23 points while the hero Davis finished with 20.

Giannis Antetokounmpo, who captained his team, scored 25 points, while Kemba Walker had played his heart out with 23 as well. Team Giannis centers Joel Embiid and Rudy Gobert had good scoring performances as well scoring 22 and 21 respectively.

It was a frantic as the game was so close up to the end. James almost won the game with a layup but was blocked by Antetokounmpo. James then attemted a 40-foot jumper to win it but missed again.
James Harden almost won it with a made 3-pointer but it was waved off after Kyle Lowry took a charge. James dunked it to put them up 156-153, and Embiid made two free throws on the other end to cut the lead to just one.

Davis then got fouled on the next trip. He had a chance to win it on the first free throw attempt but missed. He made the second one win it for Team LeBron

“I told my team I was going to miss the first one to put a little more pressure on myself here at home,” Davis said.

“That was pretty damn fun,” a sweat-soaked, exhausted LeBron James said at the end.

The All-Star game was all about honoring the late great Kobe Bryant and his daughter Gianna who died in a helicopter crash last Jan. 26.

Team LeBron wore blue jerseys, all with the No. 2 for Gianna Bryant, while Team Giannis wore red with every player wearing No. 24 on the back for Kobe Bryant. The uniforms for both teams also had a black circular patch with nine stars on their right shoulders to symbolize the nine victims (Kobe, Gianna, and seven other friends) of the crash.

“His presence was felt,” James said.

The new rules brought out the "Mamba Mentality" in the competitors. Antetokounmpo hounded James on defense. Lowry took a charges for his own defensive contributions. Leonard utilized elbows to gain positioning, Chris Paul was screaming at his Team LeBron teammates for encouragement, all giving the All-Star game an intensity hardly ever seen.

The new All-Star Game format was done for charitable causes. The two teams played a mini-game in each of the first three quarters.

The scores started at 0-0 in each of those periods with the winning team earning $100,000 for their chosen Chicago-area children’s charity.

Even the competition for charity was tough as the third quarter had some big-money drama. Nikola Jokic hit a 3-pointer with 22.2 seconds left to give Team LeBron a 40-39 lead. Team Giannis turned the ball over leading to Russell Westbrook shooting one of two from the free throw line to put Team LeBron up by two.

Had it been the traditional format, it would have put Team Giannis up over Team LeBron 133-124 heading into the untimed fourth quarter.

The NBA decided that since they were paying tribute to Bryant, the winner of the All-Star Game should 24 points to whatever the leading total score was after three quarters. That meant it was like back-to-zero.

The game clock was off, the shot clock stayed on, and the stage for drama was perfectly set as Team Giannis had a better chance of winning but the almost no-rules fourth quarter cost them.

Antetokounmpo was criticized for drafting poorly. The captain, for his part, said he chose who he thought were the underdogs among the list. He  evidently focused on chemistry too as he drafted teammates in pairs.

He drafted teammate Khris Middleton, Paschal Siakam and Kyle Lowry of the Raptors, Bam Adebayo and Jimmy Butler of the Heat, and Donovan Mitchell and Rudy Gobert of the Jazz.

It wasn't a bad draft and the underdogs could have won it in the traditional format.

Was the new All-Star game format a success? Will we see this format in the years to come? Who could have won in the old format? Let us know in the comments below.