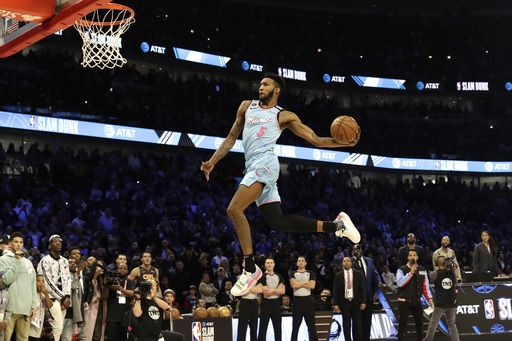 All-Star Saturday night saw a big man come out the fastest, the three-point shootout decided on technicality, and robbery at the dunk contest.

Adebayo had challenging first round in the first round of the skills challenge as he drew 2018 winner Spencer Dinwiddie of the Brooklyn Nets. Surprisingly, Adebayo had no problems going through the obstacles and drained the 3-pointer at his first attempt.

He did the same in the second round to finish off Toronto’s Pascal Siakam to earn a spot in the final.

The final saw two big men face off as Adebayo went against Indiana’s Domantas Sabonis. The matchup was closer as both missed a couple of 3-pointers before Adebayo sank his third attempt to win the competition.

Sabonis said after the game that the contest showed how "the game is changing" as the two big men were able to bringing up the ball and make smooth passes with it.

The 3-point shootout came down to Hield, 2018 champion Devin Booker of the Phoenix Suns, and Washington’s Davis Bertans.  Defending champion Joe Harris got knocked out in the first round along with five others.

Bertans went first in the final round, scoring 22. Booker had a good shooting performance with 26.

The game depended on the final shot as Hield already had 25 before sinking the final ball which decided won him the game by a point as he danced in celebration as the ball dropped through the net.

“As a shooter, this is on your bucket list,” Hield said. “You have to come in and you want to win a 3-point shootout. With a stacked field like that, it makes it even better. Pressure is on, and you've got to show up,” he added.

Had all balls been worth a point, Hield would have most likely lost that contest.

All dunkers brought out their props right away in the first round.

Jones brought out a birthday cake to celebrate his 23rd birthday and called his Miami Heat teammate Adebayo to assist him on his first dunk. Gordon got an asset from Chicago native Chance The Rapper for his first few dunks. Milwaukee’s Pat Connaughton leaped over Bucks teammate Giannis Antetokounmpo but kissed the ball off the glass before dunking it. Los Angeles Lakers’ Dwight Howard paid homage to Kobe Bryant as he brought back his Superman dunk from 11 years ago.

It was down to Jones Jr. and Gordon in the next round as the two made a showcase with a series of dunks. Jones scored 48 on his final attempt and the next series of events were a shocker.

Gordon's final dunk included him jumping over a 7-foot-5 Tacko Fall to the delight of everyone in attendance. Two judges gave the dunk a 10 while the other three only gave 9s, which only gave Gordon a score of 47.

Controversy again happened as Gordon felt like it was 2016 all over again when he lost to Zach LaVine in what was arguably the most entertaining dunk contest ever. Gordon, who set a dunk contest record with five perfect scores couldn't hide his frustration.
Gordon was asked about the possibility of him joining for vindication but he announced his retirement from the competition.
“I feel like I should have two trophies," Gordon said.
This probably should mean Vince Carter does not deserve any praise for his epic dunk in the 2000 Olympics as well right?

How do you feel about All-Star Saturday? Who were your picks to win each contest? Do you agree with the result of the dunk contest? Let's hear your thoughts in the comments below.
For more SportNuz, click here for the latest updates.
All-Star Weekend Basketball Basketball News NBA NBA All-Star NBA News