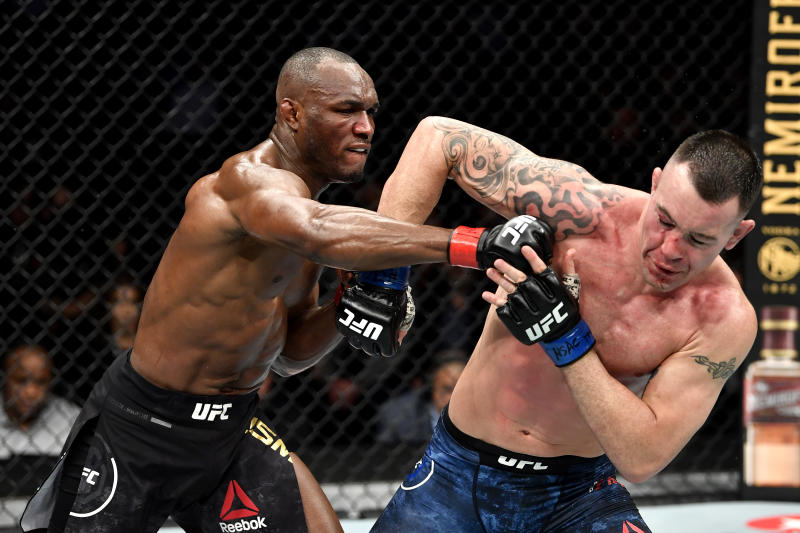 Kamaru Usman almost lost his welterweight title to Colby Covington in the judges' scorecards. He almost got robbed had it went the distance.

Usman wasn't aware that his grasp at the title was slipping away as the clock ticked in the final round of an unbelievably entertaining fight. Covington gave it his all despite suffering what he believed to be a broken jaw.

Both fighters were landing clean shots on each other up until the final round. The possibilities would have set up a never-ending debate had it went the distance

Usman finishes Covington in fifth round

The "Nigerian Nightmare" finished "Chaos" at 4:10 of the final round to retain his belt in the main event of UFC 245 at T-Mobile Arena.

Covington was pushing the pace early as he landed several good left hands to Usman. The champion surprisingly showed proficiency in the standup as well as he focused on body shots eventually took its toll on Covington.

The challenger noticeably down in the second half of the fight as he told his corner he thought his jaw was broken after the third round. Usman had no idea of this as he continued to stand toe-to-toe with Covington, frustrating him with harder shots.

The final round sparked a sense of urgency in Covington who suddenly had a new burst in energy. He opened the fifth round looking to dictate the pace the same way he did early. Usman wasn't threatened as he remained composed.
Usman that dropped and the controversial welterweight the first time with a perfectly timed straight. Covington managed to recover temporarily before being dropped again a second time as referee Marc Goddard jumped in to stop the fight.

Judges divided between Usman and Covington

The fifth round was the deciding round for the fight. One judge scored the first four rounds 3-1 for Covington while the other had Usman 3-1. The third judge scored it 2-2, which raised questions from UFC commentator Joe Rogan.

Usman's victory puts a temporary halt to his bitter rivalry with Covington, who was taunting and trash talking since the fight was announced. The champion remained composed throughout everything as he dedicated his victory to his family and the whole world watching.

How did you score the fight coming into round 5? Who's next for Usman's title? What's next for Covington? Leave a comment and tell us your thoughts.