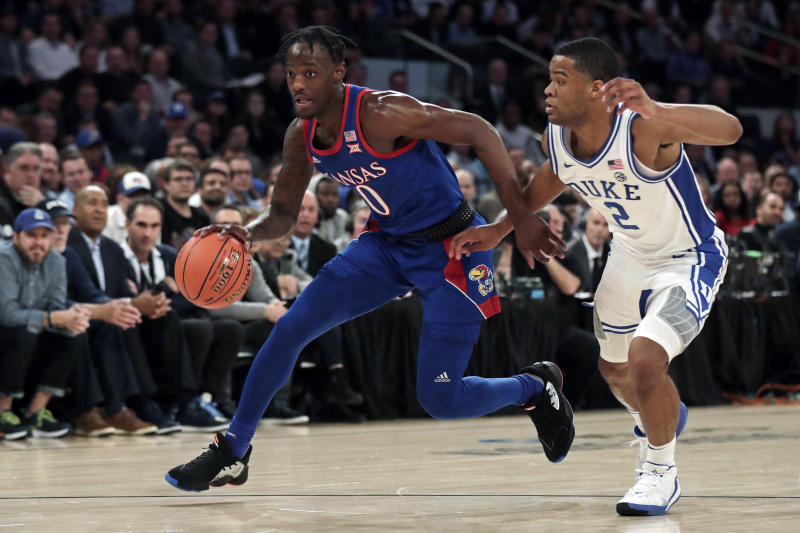 Kansas and Duke had a nail biter at the Madison Square Garden to kick off their seasons Tuesday night. The No. 4 Blue Devils outlasted the No. 3 Jayhawks, 68-66.

The Jayhawks shot 53 percent from the field in only 19 shots. They were leading 22-18 midway through the first half but Duke's defense caused them to heavily turn the ball over.

Kansas head coach Bill Self was questioned about his team’s early performance. Things shortly started to turn around for the Jayhawks in the second half but was only temporarily.

“Yeah, we were awful,” Self said

Duke’s solid defense crumbled midway through the second half as Kansas went on a 14-0 run. Freshman Ochai Agbaji sank a deep 3-pointer the Jayhawks the lead over the Blue Devils by six with about 15 minutes remaining.

The Blue Devils managed to force nine more turnovers in the second half to give Kansas a total of 28 turnovers in all.

Matthew Hurt hit a big 3-pointer to tie the game 59 with three minutes to go. A three-point play from Stanley and jumper from Jones put the Blue Devils up three before taking a timeout with 1:33 to play. A successful stop with 4.2 seconds left sealed the deal for Duke.

Tre Jones led Duke with 15 points, six rebounds and six assists, while Devon Dotson led Kansas with 17 points, two rebounds and an assist. The Blue Devils shot 38.3 percent from field goal range (23 of 60) and the Jayhawks shot 45.1 percent (23 of 51).


What else went wrong for Kansas in their game against Duke? Let's talk about it in the comments below.