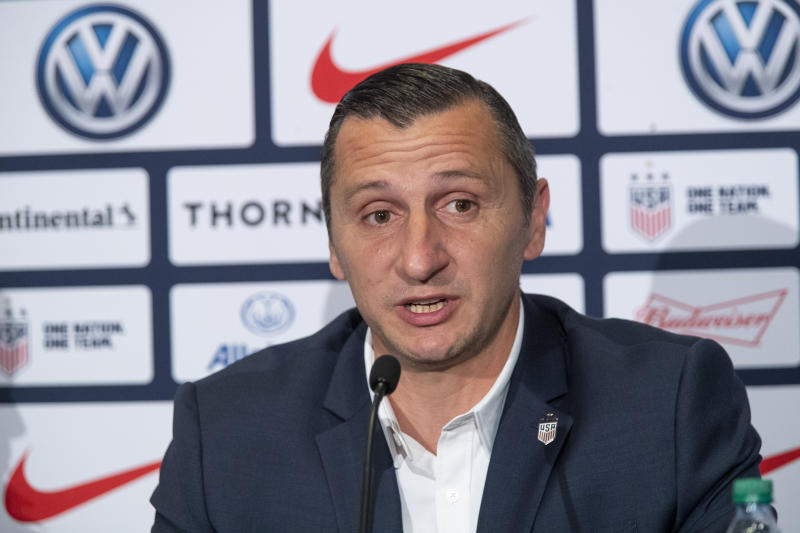 Andonovski was hired as the eighth coach in USWNT history on Monday. He has coached in the National Women's Soccer League for the past seven years before being hired for national team duties.

“It's a huge honor and I'm very excited to get started with this group of players and staff as we work towards continued success for this program,” Andonovski said in a statement.

“All of the talented coaches and players that have come before have built a legendary tradition of excellence and I'm committed to working very hard to continue to move this program forward,” he added.

The new USWNT coach will have the task of keeping the team atop the world rankings. HE also might be caught up in some of the drama behind the scenes.

Who is Vlatko Andonovski?

Those who have followed the NWSL will be familiar with Andonovski. He has coached his way to two NWSL titles since the league's inception in 2013.

Andonovski was a former professional player as well. He left his native Macedonia in 2000 to play professional indoor soccer. He competed in the Major Arena Soccer League as part of the Kansas City Comets. Andonovski ended up becoming the coach of the Comets' women's team  FC Kansas City.

His name still doesn't ring a bell in the upper echelons of women's soccer despite his experience as a youth coach. Some USWNT players even listed FC Kansas City as their one allocation veto due to concerns over the unknown coach.


What is Andonovski about?

Andonovski quickly earned a reputation for implementing an attractive possession-style soccer. He managed to lead FC Kansas City to back-to-back league titles in 2014 and 2015 with his type of style.

He also led Seattle-based Reign FC to two straight playoffs despite its injury-depleted lineup. He employed a pragmatic approach that required fielding more than 30 different players over the course of the year. His accomplishment was enough for him to win the 2019 NWSL Coach of the Year award.


Why Andonovski got the job?

USWNT officials look to see if Andonovski's success in the NWSL can translate to the world stage.

He has experience coaching some of the USWNT such as Megan Rapinoe, Allie Long and Becky Sauerbrunn, who were all on the USWNT's recent World Cup-winning squad. He is also familiar with the other members of the squad having coached against them in the past.

With the clock to the 2020 Olympics running, the USWNT needs to get ready in a short period, in which Andonovski can possibly effective.

USWNT general manager Kate Markgraf emphasized on player input being a part of the coach selection process, and Andonovski has reportedly been the most popular choice amongst the USWNT core.


How Andonovski will be a good fit

Andonovski thrives from the mystery. He was an unknown when he arrived in the NWSL but quickly won praise for the style of play he implemented in Kansas City.

He has proven himself tactically flexible as he is willing to adapt to changes in system. Andonovski's work during the 2019 season demonstrated his ability to adapt. He was also able to maximize an entire roster when players went down with injuries.

Training is another strong point. Andonovski is known for his intensity and thoroughly preparing his players. Staff at FC Kansas City can tell stories about surreptitiously moving Andonovski's perfectly aligned cones for drills, which the coach always noticed and fixed, frustrated with himself for messing up.

Players who played under him have positive feedbacks as they believed Andonovski made them better players.


When is Andonovski's big test?

Andonovski is already set to host an identification camp in December. He is tasked with the challenge of shrinking the USWNT before expanding it. That means he'll have to fill in 18 roster spots for the Olympics down from the 23 it had in the World Cup. It's the first tough task ahead for Andonovski.

As for the players, Andonovski has to decide what to do with the recently injured Megan Rapinoe as players like Heather O'Reilly waits for decisions to be made. He would also have to deal with  the likes of Carli Lloyd, who has said she'd rather retire than rot on the bench for the USWNT, or Alex Morgan, who will have recently given birth by the time the Olympics roll around.

If the big stages are the first big test for a newly appointed coach, Andonovski's decision making when it comes to the USWNT roster will be the first big one.


Is Vlatko Andonovski a perfect fit for the USWNT? Will his past successes translate to the world stage? Tell us your thoughts.