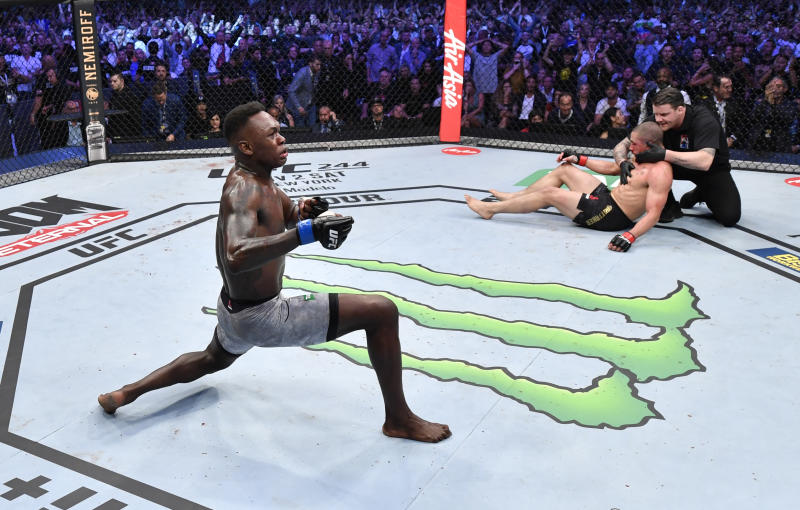 Israel Adesanya rose to the top in only his seventh UFC fight,in the last 20 months. One of the quickest rises to MMA stardom has been completed on Saturday at UFC 243.

Adesanya knocked out Robert Whittaker with a two-punch combination in the second round of their title unification bout at Marvel Stadium in Melbourne, Australia.

He became the undisputed UFC middleweight champion with the win. Adesanya now  establishes himself as one of MMA’s biggest stars in modern day UFC.

Adesanya knocks out Whittaker in Round 2

Whittaker was actually shots on Adesanya. The latter’s height and reach advantage was necked by Whittaker choosing to close in.

This also caused Adesanya to throw restricted punches as his length had to be fit in such small room for strikes. He managed to drop Whittaker with a second left in the first round.

After seemingly being saved by the bell in the first round, the damage of being rocked has been done going in to the  second round.

Adesanya not only showed good boxing skills but the power to go with it. He threw a counter left in an exchange which dropped Whittaker prompting the referee to call the action.


Adesanya's rise to the top

Four years ago, a 26-year old Adesanya was sitting in the stands in the same venue when Holly Holm upset Ronda Rousey at UFC 193.

Adesanya imagined himself being on the other side as he dreamt of one day becoming part of the UFC roster. He made his own mark in the same venue on Saturday with a magnificent performance.

Whittaker questioned Adesanya’s toughness prior to the fight. He said Adesanya didn’t like to get hit and vowed put hands on his challenger.

Though he was able to deliver in that, the outcome of the fight didn't go as foreseen. Adesanya has showed the chin since the interim title fight last April with Kelvin Gastelum at UFC 236.

“That was a nice one he caught me with, but look at the return,” Adesanya said in the Octagon as he watched a replay of the finish. “I eat it and I give it back in return, two times. That’s a two-piece right there. … I can take it and I can give it back. I don’t like to get hit. He’s right. It’s stupid to get hit. I’m not that dumb.”

The title fight was supposed to be Whittaker vs Gastelum. It was scheduled to happen last February before Whittaker pulled out to undergo emergency surgery after the weigh-in for UFC 234.

He struggled to get back on track. “I thought I was doing pretty well until I got caught,” Whittaker said.

The 13-0 Costa is assumed to be the next in line after beating Yoel Romero last August. Adesanya wants a fellow unbeaten for his first title defense but other plans might happen.

The seeds for a new rivalry has been planted. The two don't like each other but everyone else like to see the two finally face each other.


What can you say about Adesanya's performance Saturday night? Do you want to see him face Paulo Costa next? Tell us what you think.