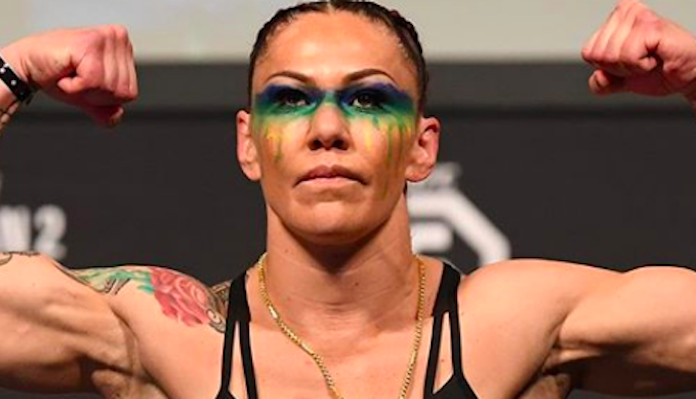 Cris Cyborg has found a new home where she has the chance to have dominion over all women's featherweights.

Bellator MMA president Scott Coker announced that they have signed the largest deal of ts kind in women's MMA history as he referred to Cyborg. He did not reveal any more details aside from the contract being a multi-year, multi-fight exclusive deal.

“I have worked with countless athletes over my thirty-plus years of promoting combat sports, but there is no one quite like Cyborg,” Coker said.

Cyborg is leaving an impressive UFC career in the rearview mirror as she looks to become the alpha female in Bellator.

Cyborg joins a list of names which may or may be not on her former promotion's radar.  Julia Budd, Leslie Smith, Olga Rubin, Arlene Blencowe, and Janay Harding top a list of potential rivals in Bellator’s 145-pound women's weight class.

Budd is the current Bellator Women's featherweight champion. The Canadian striker has not lost in eight years. Her last loss was at the hands of Ronda Rousey back in 2011.

Smith has the best credentials among the women mentioned. Although she already lost to Cyborg in 2016, her UFC credentials are not to be discredited.

Harding and Rubin are fairly new to the sport with the former being the more tenured one.

“Her ability to excite the crowd from the moment she makes her walk to the cage is special," Coker said.

The Bellator president has promoted a number of Cyborg's fights in the past. "I am looking forward to the opportunity of promoting her once again," he excitedly tells reporters.

"Julia Budd and the other women that make up best female featherweight division in the world have eagerly awaited her arrival,” Coker teases.

Cris Cyborg's fallout with the UFC

Cyborg and Rousey were the UFC's top priorities when it opened it's doors to women's MMA.

Her three contentious years fighting in the UFC saw her tear through all but one opponent. Despite her success, she never really had a good working relationship with UFC president Dana White.

Cyborg's only loss in the UFC was against current UFC featherweight titleholder Amanda Nunes, who is now both the bantamweight and featherweight UFC champion.

She bounced back after the painful KO loss. Cyborg defeated Felicia Spencer at UFC 240 in her final fight under the company.

The fallout started when Cyborg and her team posted controversial and incendiary videos. She admitted to the altering of one of those videos which happened to misrepresent White.

White soon declared himself "out of the Cyborg business" as he released Cyborg from any and all contractual obligations. The painful part is he was not afraid to waive one of those clauses that afforded the UFC the right to match any competing offer.


Who will Cyborg face in her Bellator debut?

One of Cyborg's main reasons for her unhappiness with the UFC was not being busy enough. He only fought once a year which made her rusty in some of her performances

Cyborg has held the Strikeforce, Invicta FC, and UFC featherweight belts. She could make history if she claims the Bellator belt.

That's not bad of a deal if she wins it all.

What do you think about Cyborg signing with Bellator MMA? Will she get more challenge there? Leave a comment and let us know what you think.