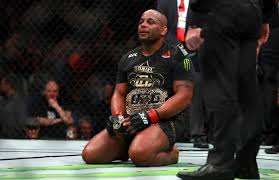 UFC heavyweight champion Daniel Cormier already made a self-imposed retirement deadline. He still plans to quit while on top three months past that deadline.

The 40-year old Cormier believes his rematch with Stipe Miocic at UFC 242 could be the final fight of his UFC career.

His late start in actual MMA at 30 years old was pre-conditioned by an impressive Amateur Wrestling background.

Cormier was an All-American wrestler in college and a two-time Olympian for the United States team. His decade in mixed martial arts is equally as impressive.

Despite being fairly undersized at 5'11, he has managed to dominate taller opponents both at heavyweight and light heavyweight.

Being the wrestling coach at American Kickboxing Academy at one point, Cormier took advantage of top-level training partners such as Cain Velasquez, Jon Fitch, and Josh Koscheck to try his hand in the sport.

He was initially supposed to be a back-up plan. A reserve in the Strikeforce Heavyweight Grand Prix tournament.

Cain Velasquez was at the top of the heavyweight division when Cormier came to the UFC so he decided to make the more feasible move which is to drop to light heavyweight.

He fought at heavyweight twice before officially making the move. Two wins later, Cormier is fighting for the title.

The first title match created what has been a storied rivalry with current UFC light heavyweight champion Jon Jones. Jones' personal issues caused him to be stripped of the belt.

Cormier fought Anthony "Rumble" Johnson for the vacant light heavyweight title. Johnson dominated most of that fight as he threw all strikes with bad intentions.

Johnson gassed out later in the third round allowing a composed Cormier to sink in a rear naked choke thus winning the light heavyweight belt.

Move back to heavyweight

Now with teammate and close friend Velasquez dealing with injuries, Cormier decided it was time for him to move up.

Cormier would go on to become the promotion's second two-division champion when he knocked out Miocic in the first round at UFC 226 in 2018.

He also became the promotion's first two-division champion to defend at least one of his belts while simultaneously holding the other.

He settled with a rematch with Miocic in the main event of UFC 242. The bout is slated for Aug. 17 in Anaheim, California.

The ghost of those two losses to Jones (one was overturned after Jones tested positive for a steroid metabolite turinabol) may still haunt Cormier but he believes the bout with Miocic may prove to be his final fight.

Miocic is still owed a rematch clause for being the prior title holder. Cormier is preparing to face a better version of the man he once beat.

"I truly believe (Miocic) is going to be a better version of himself," Cormier said in a recent interview with TMZ Sports. Cormier knows that Miocic will not make the same mistakes he did in the first fight.

The plan was to fight until he is 40, according to him. It is three months past that due date now which gives us an idea of what's next.

" couldn't make that one, so if I hold true to what I was saying, then this would be the final one. I don't anticipate fighting much past this," Cormier said.

Should Cormier fight beyond his 40s? Will he be able to retire on top after August 17? Comment down below if you want to see Cormier fight again after.