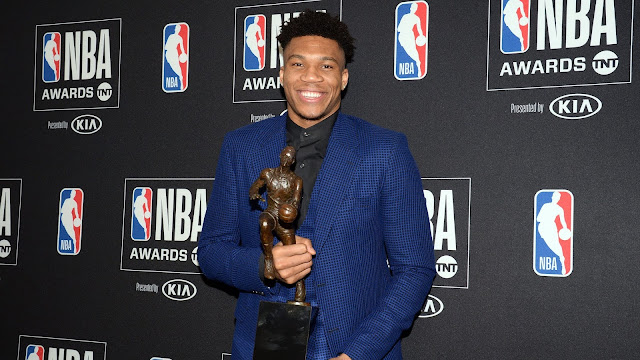 The Milwaukee Bucks knew exactly who they wanted when they selected an 18-year old Giannis Antetokounmpo in the 2013 NBA draft.

The award was announced on Monday at a ceremony in Los Angeles.

At just 24 years old, Antetokounmpo joined the ranks of LeBron James and Derrick rose as the youngest players to win MVP.

The native of Athens, Greece, is the fifth player born outside of the United States to win the award.

Antetokounmpo beat out James Harden, Paul George, Nikola Jokic, and Stephen Curry
in the voting for the award.

It meant Antetokounmpo or Harden were the only ones who got either No. 1 or No. 2 on their ballot.

George made a a solid case for himself as a candidate but only managed to finish third. Jokic and Curry came in last.

Antetokounmpo gave credit to his team in his speech. He said that the "MVP is not about stats and numbers. It is all about winning and all about making sure you go out there and do everything you can to win."

"I think that is what we did as a team," Antetokounmpo added

He stated two things that motivated him to do better:  his father's passing and a challenge by Kobe Bryant on Twitter to win MVP.

"Definitely Kobe, he is the one that started that flame," Antetokounmpo said.

The season was his to begin with

Antetokounmpo managed to improve his stat line every season. The 2018-2019 season was his all along.

He averaged 27.7 points, 12.5 rebounds and 5.9 assists per game while efficiently recording triple doubles on many of his games. He led his team to the best record in the NBA which earned the Bucks the no.1 seed in the East.

He became the first player in 20 years to average 25 points and 10 rebounds per game on a team with the league's best record. Shaquille O'Neal was the last to do it as a member of the 1999-2000 Lakers team.

He finished second in the All Star ballots only behind perennial leader LeBron James. He was voted a 2019 All-Star team captain alongside James in the process.

The Bucks dominated the Detroit Pistons in the first round of the playoffs, dismantled the Boston Celtics in the second round, before being eliminated by eventual champion Toronto Raptors in the Eastern Conference finals.

Giannis averaged 25.5 points and 12.3 rebounds per game during the postseason.


Will this be the first of many MVP awards for Giannis Antetokounmpo? Comment down below and let us know what you think about the new NBA MVP.