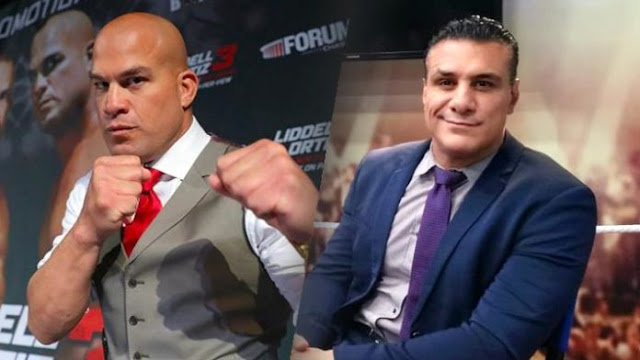 WWE fans know him as the Hispanic aristocratic heel character.

Little do they know that José Alberto Rodríguez or better known as Alberto Del Rio or Alberto El Patron outside WWE is actually a legitimate MMA fighter.

Hardcore mixed martial arts fans may have heard that ex-UFC light heavyweight champion Tito Ortiz has signed with the Combate Americas promotion. This opens up a possibility for a high-profile non-UFC bout.

Del Rio is affiliated with Combate Americas. He used to be the president of the MMA promotion before stepping down to focus on his pro wrestling career.

Del Rio is still seen around the MMA circle and his good ties with the promotion makes it a possibility.

He has a decent background in MMA holding a professional record of 9-5. His most notable fight was under the PrideFC banner in 2003 when he faced MMA legend Mirko Cro Cop.

Unfortunately, Del Rio got knocked out cold in that fight.

Wrestling Observer Radio's Dave Meltzer mentioned the rumor about Del Rio possibly facing an MMA legend. All signs point to that legend being Tito Ortiz after his recent career move.

Del Rio stated last year that he was preparing for a return to fighting. He wanted to get into the cage sometime this year. Now is his chance to do such as he has the liberty of schedule on his side.

His last fight was way back 2010 when he lost to Yamamoto Hanshi via second-round TKO.

It would be interesting to see if his ring rust in MMA has been offset by his activeness in professional wrestling.

A good way to test that is against a former 205-pound UFC champion.


Will Tito Ortiz vs Alberto Del Rio/Alberto El Patron happen? Do you like to see it happen? Let us know what you think about this potential fight.