Anthony Davis to New York? Here’s how it can happen 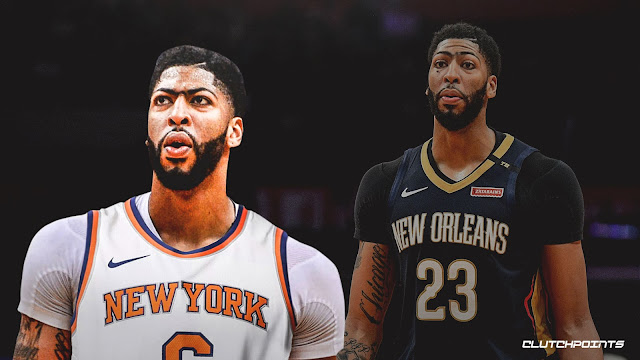 There is a lot of drama in New Orleans. It is no secret that Anthony Davis wants out.

There are a number of possible trade scenarios for “The Brow” as teams are in pursuit of the big man.

The Los Angeles Lakers are the frontrunners to land Davis had the trade pushed through at the trade deadline. Not only did it create drama in LA but also in NO.

It is now impossible for Davis to move to the Lakers as there are bigger issues for LeBron James and the rest of the young group there.

The result of this year’s draft shook things up big time.

The Pelicans luckily snagged the No.1 overall pick during the draft lottery and teams are also starting to use it as leverage now that Davis wants out.

The New York Knicks is in dire need of a star that can possibly carry them to playoff runs again.

With a number of different options, here are some possible scenarios:

Only the New Orleans Pelicans are happy as not only do they still have Davis under contract, but they also have the rights to the No.1 pick in this year’s draft.

The Pelicans will surely draft Duke’s athletic phenom Zion Williamson and groom him into their star with or without Davis’ participation.

Williamson wanted to go to New York, but the team were the draft lottery’s biggest losers. With the possibility of not getting maximum participation from the consensus future star, he might as well be paired with a familiar face.

The Knicks are picking No.3 and will probably be picking Duke’s RJ Barrett in the draft.

Making a straight trade may not make sense credentials wise but it truly does from a business standpoint. Davis finally goes to New York, Williamson and Barrett reunite in the pros, and everybody gets a good bargain for this tradeoff.

Plus, the Pelicans will be clearing a ton of cap room which can be used to sign a willing star to boost their team’s offenses.

Keeping Davis to the Pelicans will surely be filled with drama. It can possibly negate winning the Zion Williamson sweepstakes.

Send him to New York without expecting valuable pieces. They already won what is possibly one of the best draft lotteries’ in the last 5 years. It wouldn’t hurt chancing on another draft pick next year.

They’ll surely be getting Williamson regardless. It’s better to focus on developing him as the team’s main man rather than having their current main man hindering his development.

Williamson is considering going back to play another year in Duke because of the results of this year’s draft lottery.

A package of both him and Davis will surely make the Knicks give everything they possibly could. Trading down in the draft isn’t actually a bad idea as it sounds.

The Pelicans won the lottery despite not straight-up tanking for the pick. It might give them a better chance winning the lottery again by simply not being triers.

Ask for that third overall pick New York has and draft whoever they want to build their franchise around with that pick then send Davis, the draft rights for the No.1 overall pick to New York.

The Pelicans have leverage of asking whoever they want in that trade and will probably ask for all the top players in that lineup.

That will make Williamson happy and might just be that franchise changer in New York compared to if he will be playing for New Orleans.

Will we see in Anthony Davis in New York next season? Let us know what scenario you will chose.