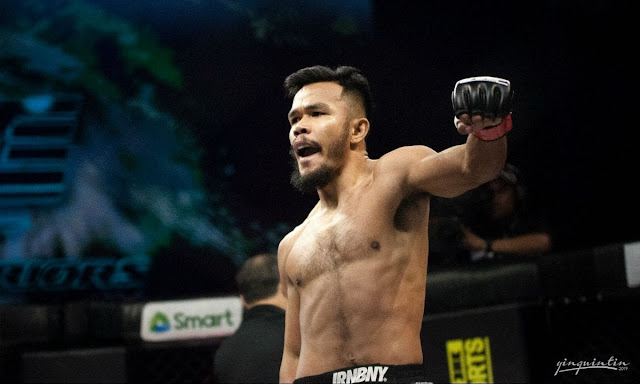 The journey towards the UFC has been a struggle for MMA fighters in the Philippines.

Some Filipino MMA fighters choose to settle for either local and regional leagues while others don't just give up on their pursuit.

One of those fighters has had a taste of that big league paycheck and looks to have it again.


The journey to the UFC

Dy signed with the UFC as a replacement fighter as he was scheduled to fight Alex Caceres on late notice.

It was Dy's first taste of the big leagues but he didn't back down. He showed "Bruce Leeroy" how he isn't intimidated by the American's experience.

Unfortunately for Dy, a cut forced the doctors to stop the fight just when Dy was on the verge of the comeback. Caceres won that fight via doctor stoppage.

Dy's second fight in the UFC was against Team Alpha Male member Teruto Ishihara. He was rocked by the Japanese fighter early on the fight but managed to survive the early onslaught.

He managed to fight back later on but differences in fighting style and stances caused repeated but accidental strikes to the groin of Ishihara thus, the point deductions. Dy could have made a case for a come from behind decision win but the deductions were to much to get back from.

His next fight was against Wuliji Buren from China in which he won via unanimous decision.

After taking fights on short notice, it took a full seven months before Dy would be given another fight. His next task was New Zealander Shane Young.

Dy gave it his all in his best performance yet but Young was very tough to finish. It was Dy that would get TKO'd in the second round of that fight.

Both fighters earned each other's respect and a hefty "Fight of the Night" bonus that would make Dy an instant multimillionaire when he went home to the Philippines.

After winning only one in four UFC fights, the promotion gave Dy a very quiet slip.


The journey to a second chance

Dy went on another lengthy layoff with the promise of a strong comeback in 2019.

His first fight since his UFC slip was against Izzeddine Al Derbani at Abu Dhabi Warriors 5. Dy's UFC experience proved to be a factor as he quickly disposed of the Jordanian.

Next was against Mehmosh Raza at Brave CF 22 in front of his home crowd. Dy did not disappoint in what can be considered the punch heard around the world.

Dy knocked Raza out cold. He punched so hard that his opponent's mouthpiece went flying.

The highlight made multiple sports centers and websites. It also became a social media frenzy.

Dy is no stranger to title fights. He fought Kyle Aguon twice for the Pacific Xtreme Combat bantamweight title in which he suffered controversial losses.

Looking forward, he has another title fight coming as Dy sets his sights on the Abu Dhabi Warriors featherweight title.

He will be facing Kazakhstan fighter Yerzhan Estanov (16-7-1) for the Abu Dhabi Warriors featherweight title next month.  Dy considers this his strategy to get himself back into the UFC someday.

Dy now has two solid wins under his belt in 2019. He doesn't plan to take long layoffs in a sport he considers his day job.

“No time for a vacation,” Dy said.


Have you seen Rolando Dy's highlight reel knockout? Who wants to see more? Tune in to the next Abu Dhabi Warriors event happening this May 3.