Justin Gaethje puts Edson Barboza to sleep in Round 1 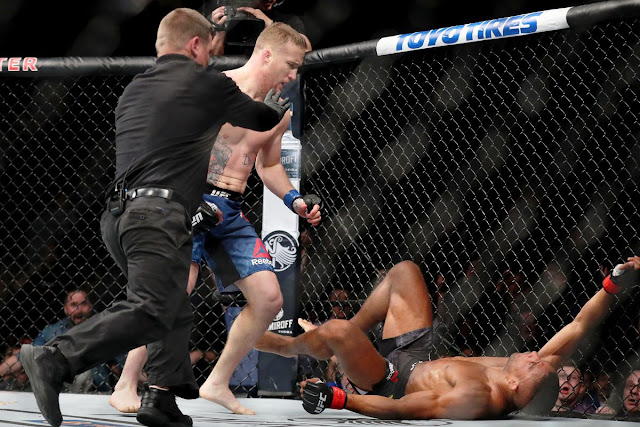 We have officially having a renaissance of punchers in MMA as Justin Gaethje adds another name to a list of kickers knocked out by punches.

Gaethje has cemented his spot as the most exciting fighter in mixed martial arts after Saturday's win over Edson Barboza.

The two fighters engaged early. Both showed composure despite the damage made by each of their strikes being evident.

They pretended as if nothing hit them but the mind games didn't have to last long.


Another KO win for Gaethje

It was expected to be a good show as Gaethje's video game fight style meets Barboza's slicing arsenal of kicks.

It's the type of fight that fans wouldn't find borung even if it went five rounds. Gaethje needed only one however to make a statement.

Both Gaethje and Barboza threw bombs since the opening bell rang. It was clear that there was little chance that these two lightweights were going to make it out of the first round.

Barboza went to his signature array of kicks. Gaethje actually threw some effective kicks as well which made his Brazilian opponent back up a little.
Gaethje knew the momentum was his and started to plow forward to be the aggressor. Barboza seemed intimidated with his opponent's toughness but tried to still land his shots.

One particular shot slipped through Barboza’s defense which rocked him. Gaethje then moved in for the finish.

After surviving the first onslaught, Barboza looked to close the distance with a clinch. He managed to land some hard combinations on Gaethje The tough as nails Gaethje took them all however. He was like a villain in a suspense movie who does more damage when hurt.
Gaethje then caught Barboza with a perfectly landed right that knocked the Brazilian striker out cold.
The referee stopped the fight before ground strikes would follow at the 2:30 mark in the opening round.

“I just love this so much,” Gaethje said after another impressive first round finish. He once again lived up to his nickname "The Highlight."The KO win is Gaethje’s third in the UFC. He is knocking on the door for another marquee fight to place him back in the title hunt. a

Gaethje seems to be frustrated with how the rankings work in the UFC.

“UFC what the hell are you thinking moving Donald Cerrone in front of me? He beat the No. 15 guy, he just gets to jump ahead of me? This is ridiculous,” Gaethje said.“There’s five or six guys in front of me. I want each and every one of them," he added.
Cerrone may have gotten the message and that's one fight UFC fans might want to see happen.

First it was ground game, then grapplers started loading their fists with power. Leg kicks would soon become the most important thing until lately.

Anthony Pettis knocked out another prolific kicker in Stephen Thompson just the week prior. Pettis, who is also known for kicks used a Superman Punch to finish his opponent.

Bottom line is, punchers are having a renaissance in the MMA world. Either the fighters have trained to endure leg kicks more or they are just less cautious these days.

Maybe Cody Garbrandt started it all?

Were you impressed with Justin Gaethje's highlight KO victory? Who's the next one to be punched out cold? Leave a comment and rank this fight among the best finishes in the UFC.