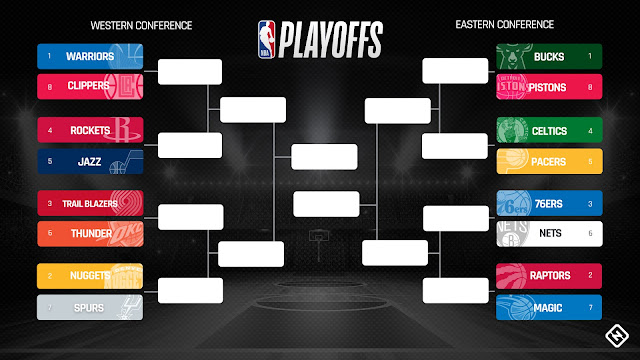 The NBA season has come to a close last Wednesday. We are now entering the 2018-19 NBA postseason.

There are some surprise entrants such as the Brooklyn Nets and the LA Clippers. There are surprise non-entrats as well such as the Lebron James-led Los Angeles Lakers and the New Orleans Pelicans

With a shake up in this year's playoff brackets, let's take a look at each one:

Coach Doc Rivers has done a good job with the Clippers. They managed to rack up wins under the leadership of Tobias Harris, which makes it a shock as to why they traded their star.

The team managed to still hold their own however and secured the 8th seed in the loaded Western Conference.

The Clippers have leaned on the scoring of Lou Williams and the hard work underneath by Montrezl Harrell. Another revelation for them is rookie Shai Gilgeous-Alexander who has done a good share as well.

As for the Warriors, there's nothing new to expect other than the possibility of outshooting the 3-point records they have already made.

You know where you will find the Warriors' starting five and the Clippers must make sure they stick to their assignments if they hope to put up another fight.

The Warriors lead the season series 2-1 with that one loss dating back when Harris was still with the Clippers.

Will the Clippers stand a chance?

The Denver Nuggets are a quiet success story. They were a game away from making it last year but this time is different.

The Nuggets made sure no team will be lucky by a win this time as they secured second seed. There's nothing flashy about the team except Nikola Jokic's brilliant playmaking from the center position.

They made sure to make the most out of  Paul Millsap Will Barton, Gary Harris, and Jamal Murray. Denver might have been the heartbreakers of this season considering the Nuggets lack a true second star.

San Antonio with Gregg Popovich has always made the Spurs a sure playoff team each year. It can't be denied however that Kawhi Leonard and Danny Green are playing like crazy in Toronto after being dealt.

The Spurs still have LaMarcus Aldridge and DeMar DeRozan, the star they got from the Leonard trade.

The team's more structured approach has not seemed to hurt DeRozan's game judging by his production this season.

The two teams split their season series against each other. Nuggets have the home-court advantage but the history indicates how the Spurs perform just the same whether home of away in the playoffs

The Portland Trail Blazers were tanking to avoid the Thunder after sitting their entire starting lineup. It still didn't work as Damian Lillard and C.J. McCollum will still have to deal with Paul George and Russel Westbrook's OKC.

the Blazers had a reason to avoid the Thunder after losing all four meetings during the regular season. The playoffs erases every regular season performance though but still there are still doubts in Rip City.

The Thunder have a knack for rallying up. The team that started the season 0-6 managed to go as high as third in the Western Conference before suffering huge setbacks towards the end which pushed them down to sixth.

George is currently the consistent man for OKC alongside Steven Adams on the boards. Russel Westbrook is still a freak athlete but will he allow PG-13 to take care of the scoring load?

As for the Blazers, we already know Lillard and McCollum can alternate and give way for each other on offense. It now boils down to which shallow bench will do better.

Portland bounced back from a 28-point deficit with only bench players on the court. Will it prove enough come playoffs?

The Houston Rockets do not look as smooth as they were last season. Although Chris Paul's injury last year may have given the Warriors the title for the luckiest team in the NBA, The Rockets can't seem to find that groove back despite Paul's two healthy hamstrings.

The Jazz's more defensive lineup may counter the Rockets' more offensive one. We know how Donovan Mitchell can break superstar's hearts with his veteran-like confidence on the court while Rudy Gobert will surely send the Rockets settling for threes instead.

Utah will have more to deal with on the boards though with Kenneth Farried suddenly finding the right fit in the Rockets' rotation.

Both teams split the season series. The Rockets won two with harden scoring more than 40 on both.

The Jazz might just pull another first round upset this year if they find a way to contain Harden.

Coach Mike Budenholzer knows what his doing. He took a mediocre Atlanta Hawks team to the best record in the east during his time there. He's now doing the same with a significantly more talented Milwaukee Bucks team.

The Bucks have been the surprise team of this season. Nobody expected that a team led by a still very young Giannis Antetokounmpo.

Antetokounmpo is the frontrunner to win this year's MVP. A lot jumped on the bandwagon after everyone saying "who's he?" when he got drafted with the 15th pick in 2013.

The Greek Freak will be backed up by Khris Middleton, who's playing like the All-Star he is and Eric Bledsoe who ironically fit in well in the Bucks rotation. Another star making a resurgence is Brook Lopez who has been splashing all season.

As for the Detroit Pistons, they are very fortunate Blake Griffin started learning other skills other than dunking. His improved ball handling and range has bought him a ticket to his first All-NBA bid since 2014.

Rebounding machine Andre Drummond will make sure somebody cleans up the glass on both ends. Drummond has been a beast on the post since the All-Star break.

Although the paint is going to be clogged enough to neutralize Antetokounmpo's drives, the Pistons still need a lot to catch up on in terms of length.

As for the Bucks, a good shooting night is almost always a sure win for them.

Armed now with Kawhi Leonard and the confidence of not having to meet LeBron in any round, the Raptors are poised to make their deepest playoff run in franchise history. The rise of Pascal Siakam, the midseason addition of Marc Gasol and their cache of smothering defensive-minded wings add to the list of reasons to believe Toronto can finally get the playoff monkey off its back.

With Leonard and Siakam on the floor together, the Raptors outscored opponents by double digits per 100 possessions this season, and they own a positive net rating with either one on the floor without the other, which means the Magic will forever face 48 minutes of relentlessness.

Orlando made the playoffs for the first time since Dwight Howard left town, adopting new coach Steve Clifford’s mantra to the tune of a top-10 defense. Nikola Vucevic, the Montenegrin big man who the Magic acquired in trading Howard, made a contract year leap to All-Stardom this season, boosting an offense that is otherwise inefficient and starts D.J. Augustin at point guard. Outside of Augustin and old Raptors friend Terrence Ross, the Magic are wildly inexperienced in the playoffs, and it would not be surprising to see a just-happy-to-be-here effort out of Orlando.

The Philadelphia 76ers are already a team to beat with a healthy Joel Embiid. Then Jimmy Butler came and added firepower on the wings. The team upped the ante when they acquired the very underrated Tobias Harris via trade.

The Brooklyn Nets are the surprise team in this side of the conference. D’Angelo Russell has broken out and proven that he is capable of carrying a team on point. Jarrett Allen has perfect timing underneath on defense.

The Nets can in fact pull off an upset if Russell keeps on playing with the Donovan Mitchell-esque confidence he has. The Sixers won't back down however as they continue to stay hungry despite the ton of talent in their rotation.

Each team split their four meetings during the regular season. It's definitely going to fall down on a tie breaker for this one.

The Boston Celtics have become favorites the moment Jayson Tatum and Jaylen Brown played like veterans when Gordon Hayward went down last season. It all continued when they still kept winning even when their superstar Kyrie Irving went down as well.

All isn't perfect in Boston though as Irving's leadership is beginning to be questioned while there is also the question of the need for Hayward's services moving forward. Marcus Smart torn his oblique in the team’s regular-season finale and will be out for some tme.

The Indiana Pacers has quetly had winning seasons for the past two years since Victor Oladipo came home. Unfortunately for them, their All-Star guard suffered a season-ending knee injury.

Their defense is still intact which is why they still kept winning and managed to still make the playoffs. Games change however and they will be needing Oladipo back if they wish to go further.

Since the Pacers will have to go minus Oladipo, the Celtics will definitely fire from where there are holes. This series might not take that much long if you want a bold prediction.

Who are your picks to win? Do you think the predictions are accurate? Tell us uf you think otherwise.