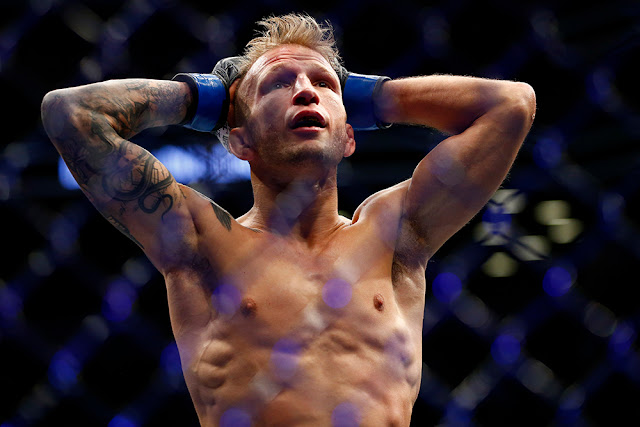 The failed USADA test is one in many setbacks Dillashaw had to endure this 2019.

First, he moved down to flyweight where he was quickly finished by new king Henry Cejudo early this year. Now his hopes of continuing where he left off at bantamweight will take a step back.


A lot before him

Details of Dillashaw's test results are yet to be disclosed. He follows the likes of champions such as Jon Jones and Anderson Silva.

His bitter rival Cody Garbrandt had accused him of using performance enhancers in the past. Maybe 'No-Love’ saw something we didn't back when the two were part of Team Alpha Male?

Dillashaw is set to miss at least a year for the misdemeanour. This follows an adverse finding by the New York State Athletic Commission.

"Out of fairness and respect to the rest of my division, I’ve informed the UFC that I’ll be voluntarily relinquishing my title while I deal with this matter. I want to thank all of you in advance for the support.”

What we will misss with Dillashaw out

Dillashaw had to cut down significant weight just to make 125. What happens if Henry Cejudo goes up to 135? will the result be the same?

The UFC bantamweight division suddenly became shallow. Marlon Moraes has the biggest claim for a title shot. Pedro Munhoz is silently climbing up the ranks after knocking out Garbrandt earlier this month.

All potential matchups will now take a step aside as Dillashaw sits out his suspension. It will be at least a year before

What happens to the division?

Now without a champion, those next in line on the rankins might be rejoicing due to the fact that their chances got better.

Cejudo's team might feel differently. "The Messenger’s" head coach Eric Albarracin said in an interview that “Henry wanted that rivalry/money fight and the 135-pound belt and to shut the critics up once and for all."

Furthermore, Albarracin explains that "this throws a wrench in our plans. It’s early and haven’t spoke with henry yet. However, if I know Henry, he still wants that belt, because he is chasing a legacy.”

What does this recent issue do to TJ Dillashaw's legacy? Will he be the same after the suspension? Who's next for the title? Leave a comment and let us know your thoughts.